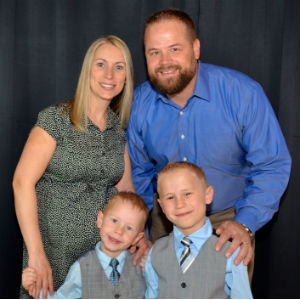 Church of God Ministries (CGM) has named Ben Shular as the new director of international ministries.

“Our world is larger than it has even been, and yet smaller and more reachable at the same time,” Ben explains. “Our focus must not only be in making disciples of all nations, but disciples empowered to replicate themselves. We can’t emphasize just building church bodies in other countries, but empowering nationals to make churches in their own countries and of their own culture. Jim Lyon has a heart to serve the church at great personal sacrifice, and give it a vision to own. I feel led to be a part of what is going to happen in the movement today under Jim. International ministries will strive to be a valuable commodity for individual congregations and their members in outreach ministry.”

Offering his talents, skills, and heart to CGM is simply an extension of Ben’s heart for ministry and for the Church of God. For the past two years, he’s served as pastor of missions and assimilation at Vancouver Church in Washington. Previously, he and his wife Kelli gave eight very successful years to missions work in Tanzania. “Whether serving overseas in cross-cultural ministry, or as a pastor domestically, I feel led to contribute to the Church of God movement in any way I can,” Ben explains. “As disciples of Christ, we must be ready to jump in and do what is most needed. I have been asked to serve as the international ministries director, and I feel a confirmation to that call.”

But Ben isn’t letting any of his achievements behind a desk or on the field go to his head. Perhaps there is no scripture more meaningful to Ben than the depiction of Jesus as a humble servant in Philippians 2. This servant spirit drives Ben’s hard work ethic and leadership. “There is a difference between serving, and being a servant,” Ben explains. “You can serve doing what you want to do, when you want to do it. A servant does what is needed when it is needed, even if they don’t want to do it. As Christians, we are to emulate Christ and strive to have the nature of a servant.”

Ben and Kelli Shular grew up in Vancouver Church. “That body of believers has supported us since we were in the nursery and on through our call to ministry,” Ben reflects. Vancouver Church has had a long-lasting impact had on their youth, marriage, and cross-cultural bent. Instead of going on a traditional honeymoon after their wedding ceremony in 2000, the couple opted for a mission trip to the country that they’d ultimately call their home for eight years.

Today, Ben and Kelli are following God’s call to Anderson, Indiana. “God’s plans are always far better than anything we have or could create,” Ben insists. “I reflect back on my life and see that both the good and bad experiences have formed me into who I am today. Success and failure are both learning opportunities. Letting go of our wants and following Jesus’ example to put other needs above our own is a great guide.”

Ben and Kelli Shular have two sons, Noah (seven) and Jonah (four). They’re expecting a third son in early July. Please pray for the family as they finalize details and transition to life in Indiana.