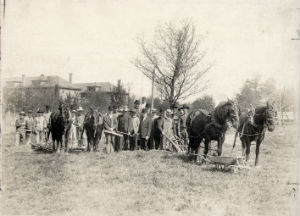 A decade after the initial idea was broached, the Church of God Interpretive Center will open in late spring 2013. Construction is now underway for the 2,200-square-foot facility, which will be housed in the Church of God Ministry Building in Anderson.

After Dr. Ron Duncan assumed the office of general director of Church of God Ministries in 2002, the Phoenix Triennial Visioning Conference charged him, among other tasks, with addressing the identity of the Church of God movement. Duncan assigned responsibility to Church of God Historian Merle Strege, who convened a group of the movement’s elder statesmen to consider the matter. They proposed the development of a Church of God Interpretive Center on a smaller scale similar to the Mennonite Mennohof in northern Indiana. 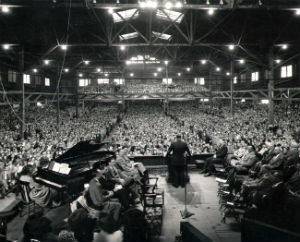 The center’s fundamental premise is summed up in this observation by the moral philosopher Alasdair MacIntyre in After Virtue: “I can only answer the question, ‘What am I to do?’ if I can answer the prior question, ‘Of what stories am I a part?’…Hence there is no way to give us an understanding of any society, including our own, except through the stock of stories which constitute its original dramatic resources.”  Applied to the church, MacIntyre’s point is that our sense of mission rises out of our identity, and we come to understand our identity by knowing our fundamental stories. We do not make up our own identity; we inherit it. But we are also free to interpret and extend that identity for our own time. The interpretive center’s intention is that visitors will experience some of the stories of the Church of God movement and leave with a sense of the movement’s mission in today’s world.

The plan of the center is structured around six displays, each highlighting a key element in the life of the Church of God. The six themes are: holiness, Christian unity, the Bible, missions and evangelism, the church (polity and membership), and healing/wholeness. Each display will make use of historical objects, photographs, video, quotations and narrative, but the center is not simply a museum. It is designed with the intention that visitors will catch something of the spirit and identity of the Church of God. That intention is in keeping with Dr. Duncan’s assignment to attend to the formation of a clearer sense of identity for the movement.

Arlo Newell, Robert Reardon, Gene Newberry, Harold Phillips, and T. Franklin Miller were the original consultants on the project. That committee determined the six major themes. A team of three individuals—Dr. Strege; Anderson University Professor Don Boggs, of Covenant Productions; and Anderson University Professor Brad McKinney—has been responsible for the overall design as well as displays. The center will open in time for the Church of God Global Gathering in June.