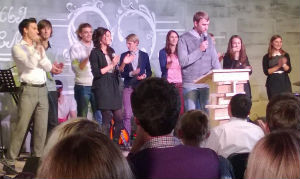 Photo: Poltava Church of God leadership celebrates the congregation’s eighth anniversary at the the annual convention this November.

You’ve seen the headlines. You’ve read the prayer requests on Church of God social media. You know we have a strong Church of God presence there. Now that Jim Lyon has returned from a trip to Ukraine, you can learn just how our brothers and sisters are faring through the ongoing conflict, politics, and constant threat of war. You can also discover the vigorous spirit behind their rapidly growing congregations that trace their roots back to Christians Broadcasting Hope.

Over the past year, tensions have mounted in what many locals are simply calling war. Leftover suspicions from a bumpy history, combined in a political and cultural pot, have set the stage for volatile relations between Ukraine and Russia. While much of what is broadcast on the news is the violence and bloodshed, the primary hot spots have generally remained to the south of Poltava. That’s where the annual convention of Russian-speaking congregations of the Church of God was held, and that is where Jim Lyon was invited to speak in November.

“You don’t want politics to become an obstacle to the gospel,” Jim insists,reflecting back on his short time in Ukraine. In conversation with Jim, it becomes clear that he takes his role to be apolitical very seriously. As such, he found himself doing a lot of listening. And he was somewhat surprised by what he heard. 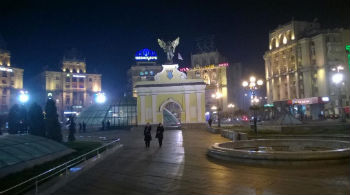 been pictured as two separate regions—one, content with Russia and willing to speak its language; the other, independent Ukraine, with a deep pride for the Ukrainian tongue. “In that division, I had always been led to believe that the Russian-speaking part of Ukraine was very sympathetic to the good old days when Russia was their partner, if not their master,” Jim explains. In his first CBH visit to Ukraine about six years ago, Jim visited the exclusively Russian-speaking south—the heart of the unrest today. “But arriving this time,” Jim recounts, “I couldn’t find anybody in Ukraine who would volunteer to speak in support of Russia. All seemed to want to remain as an independent state, fearful of Russian takeover. They are abandoning the Russian language so they can see themselves as independent people.”

Many of the young adults Jim met at the convention are volunteer soldiers who have gone to the front lines to battle against the Russians and rebel forces. According to those that spoke with Jim, the Donetsk airport is considered to be the most important asset to protect. “They see taking over the airport as a strategic goal of the Russians. They don’t believe that Crimea really wants to be a part of Russia. Everyone I talked to said those ballots were rigged,” Jim explains, referring to the March 16 referendum in Crimea that favored Russia. Some young couples who would otherwise have children have chosen to delay childbearing due to an unknown future, Jim adds. 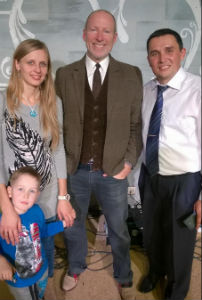 im describes the unity in the room at Poltava as “pure.” In the months leading up to this year’s convention, divisions that once existed in the Church of God there have vanished. Those who had harbored ill feelings toward other groups have reconciled. Since then, the Holy Spirit’s power has been more evident than ever. The latest spiritual growth among the Church of God in Ukraine caps years of rapid numerical growth. “I think there is a spiritual hunger in that part of the world that is consequent to the long years under communism,” Jim explains. “When communism fell, it left a vacuum.” Jim explains that under communism, Stalin intentionally replaced all semblances of Christianity within the culture with secular institutions. Christmas was underplayed while New Year’s Day became poplar—and the day on which people exchanged gifts. Wedding halls were constructed to get these sacred ceremonies out of the churches. When communism fell, people started looking for new hope.

What might the Church of God in North America learn from such humility and grace?