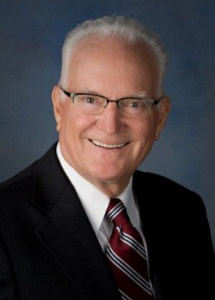 At Church of God Ministries, we are mindful that every life is precious, and we desire to support all who face challenges and heartache. We do our best to keep you informed of news of those having had far-reaching impact, and regret that we cannot cover every case. On May 11, one of our former CBH speakers passed away. The Church of God will never forget the recognizable voice and personality of J. David Grubbs, whose life we honor today.

From 1982 until 1986, David Grubbs filled the role of English speaker for CBH (Christians Broadcasting Hope, then known as the Christian Brotherhood Hour). In this role, he has forever etched his name onto a list of outstanding speakers through the decades, including Dale Oldham, Eugene Sterner, James Earl Massey, Gilbert Stafford, and Jim Lyon. According to one comprehensive history of the radio broadcast ministry of the Church of God, CBH continued to “venture and grow,” particularly in 1982, when David Grubbs became speaker for CBH—English, which included a television special called “The Doctor is In.” In the history of CBH, there were no other ventures into television broadcasts aside from a period during which David Grubbs was the CBH—English speaker.

We thank the Lord for the life and legacy of David Grubbs, which will undoubtedly live on in our hearts and minds. Please continue to pray for family and friends as they continue to grieve. Thank you.