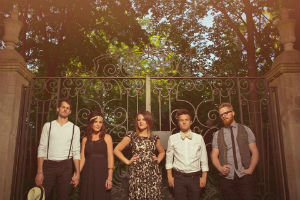 They’re Church of God, born-and-raised. They’ve sung the hymns and let the truths therein sink deep into their hearts. The harmony and conviction resonating from the saints of old still ring in their ears. Sadly, so does the clanging of discord and disharmony caused by worship wars. Though worship wars may not be as prevalent as they once were, there still exists a generational gap in many churches across the country surrounding worship styles. Alanna Story, known for their gifts of worship leadership at the Church of God Convention and numerous youth conventions, is doing something about it. Recognizing that the younger generation often misses out on the depth of the hymns, while the older generation often overlooks the value of the new, Alanna Story is set to release an album that bridges the gap.

We Hymn puts timeless hymns in a modern context, yet maintains singability and substance. Sisters Ally West and Anna Hodge grew up on the hymns of the church, many of which espouse unity. Now they’re encouraging the church to live out that unity, even in worship. “We have seen the young generation grab ahold of new choruses and melodies (which are great and help many connect to the heart of God), but many times this is at the expense of losing touch with the songs of old,” they explain. “We have also seen a generation that grew up singing hymns cling to those songs at the expense of embracing some of the new, powerful ways the church engages with the presence of God. We need both in our worship!” 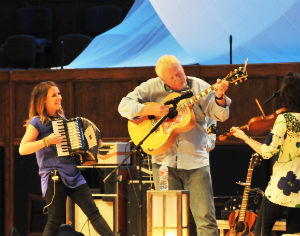 Seeking to rid the house of God of the us-and-them mentality, Alanna Story began experimenting with creative expressions of classic hymns. As they introduced some of these hymns in worship, they discovered that every generation could participate and connect with God. “The challenge with the styling of this project was to bring fresh sounds to these songs, while also keeping them accessible enough so local churches can use the arrangements and recreate the sounds in their services,” Ally and Anna explain. “So while we definitely experimented with programmed sounds like synths, electric drums, etc., as well as some of the folk instruments you would expect to hear from Alanna Story (accordion, mandolin, strings, etc.), we also used a choir and a full band so that it reflects the kind of corporate sound many churches use in their local context.”

So Alanna Story isn’t just recording another CD. They’ve set out to equip the local church with a practical way to introduce and re-introduce hymns into the modern setting. Charts, choral scores, and tracks will all be made available—for hymns such as “The Solid Rock”; “Holy, Holy, Holy”; “Crown Him with Many Crowns”; “I Am the Lord’s, I Know”; “Be Still My Soul”; “Breathe on Me, Breath of God”; “My Jesus, I Love Thee”; “When We All Get to Heaven”; as well as two original compositions.

Some may wonder if they read the title of Alanna Story’s new project correctly—We Hymn. As the group prepared for the project, they discovered that the word hymn can be used not only as a noun, but also as a verb. “To hymn” is “to praise”—exactly what the group has set out to do in this one-of-a-kind project, set to release this April. Presale is expected to begin in a few weeks, so check their website (www.alannastory.com) and social media (Facebook, Twitter, and Instagram) periodically for updates!