Though only in the executive director’s seat at Christian Women Connection for a couple months, Rev. Dr. Kimberly Majeski has already begun to lead the affiliated agency of the Church of God into a new season of growth and impact. When Rev. Dr. Arnetta Bailey passed the baton of CWC leadership to Majeski, she left the future of the organization, formerly known as Women of the Church of God, in good hands. A well-established name in the Church of God for her extensive influence at Anderson University, her history at the helm of Stripped Love (CHOG Trafficklight), her messages at the Church of God Convention, and her cohosting roles with Jim Lyon for the English broadcast of Christians Broadcasting Hope, Kimberly Majeski brings a sense of great anticipation for what God has in store for Christian Women Connection and the Church of God movement.

Of course, many remember Christian Women Connection is not unfamiliar territory for Kimberly Majeski. In her early years as a seminary student, she served the organization as its ministry coordinator. Before that, her spiritual and ministerial formation were largely influenced by the work of Women of the Church of God. So, when the doors of opportunity opened for her to minister in the capacity of executive director for CWC, she walked through with confidence and poise.

“My life’s work has been to challenge and equip the church, particularly in relation to women,” Majeski notes. “The opportunity to serve such an historic ministry grounded in the work of Jesus through women fit in an integral way to my own gifts and calling.” 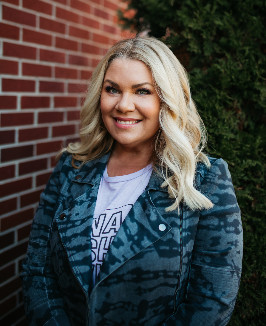 Recent years have revealed expansion in the ministries of Christian Women Connection to include education, training, and resourcing for not only lay leaders in the local church, but also women called to vocational ministry. The seminary educator—also founder of Preacher Girl School—embraces such expansion, enthusiastic about building upon that framework.

“I am an educator, and I feel passionately about women having access to training and preparation for ministry,” Majeski explains. “I also believe that all people are called to ministry, and that discipleship and the celebration of spiritual gifting is a necessary and needed expression of the church. So, with that said, we’re working hard to cultivate an environment where women can learn, grow, and thrive. This, paired with the necessity of building ministry to meet the needs of women where they are, as they are in a post pandemic world, means that online deliverables are nonnegotiable. We’ve worked through Arise Academy to build out programming to serve women who are clergy, and board members, CEOs of companies, moms and daughters, PTO presidents, and missionaries overseas. We’ve designed our programming to be accessible, most importantly, to support the women holding up the world.”

Christian Women Connection continues to cook up fresh food for the soul, initiatives and resources that equip pastors and laypeople to fulfill the ministries to which they’ve been called. But some items are on the front burner in this new season.

“Our front burner initiatives this year are the Arise Academy, launched in January, and our 90th anniversary celebration,” Majeski explains, “which will result in building nine sewing schools in Congo and Uganda, to help women in those countries have a sustainable trade and income to serve their families and lift their communities out of poverty. The celebration will culminate in our joint convention with the Women of the National Association and Church of God Ministries joining us as a track in Orlando this October.”

In all the excitement of a new day at Christian Women Connection under Kimberly Majeski’s leadership, it would be a critical omission to not thank her predecessor for paving the way before her. “Rev. Dr. Arnetta Bailey is my friend and sister,” Majeski explains. “We first met in 2001 when we were both serving our prospective teams, she then with the National Association and me with Women of the Church of God; she very soon came on board at Women of the Church of God, and we served together as ministry coordinators. Her tenure as executive director has been a MasterClass study in grace-filled leadership. Arnetta’s integrity and steady hand brought stability and vibrancy to the story of the women’s work, and we are all better for it.”

Feature (top) photo: Kimberly Majeski (center back) brings together CWC personnel (staff, volunteers, and interns) for Scripture and prayer at the office. 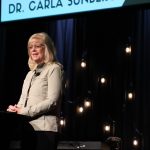 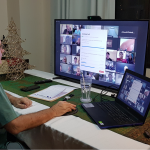