By chogministries
Posted June 21, 2017
In All Church of God
CHOG Convention 2017: Day One Delivers Power-Packed Punch2017-06-212017-06-21https://www.jesusisthesubject.org/wp-content/uploads/2016/07/ChogLogo-Light.svgChurch of God Ministrieshttps://www.jesusisthesubject.org/wp-content/uploads/2016/07/ChogLogo-Light.svg200px200px 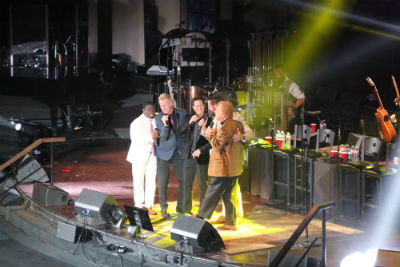 From the prayer session at 8:00 in the morning to the last note of “It is Finished” in the evening, opening day at Church of God Convention 2017 saw the power of God on display among his people—power in the five incredible voices of the Gaither Vocal Band; power in the dynamic preaching of Paul Sheppard; power in the Spirit that moved among the people.

As Ashley Cunnington (@ashleytoday) tweeted so aptly, “You can’t hear the Gaither Vocal Band and not be moved.” After all, they’re like “food for the soul,” tweeted Rob Butler (@pastorrobbutler). And with songs like, “Sometimes it Takes a Mountain,” “Dig a Little Deeper,” and “He Touched Me,” it’s no wonder the near-capacity crowd at the kickoff service for Church of God Convention 2017 kept rising to their feet with hands lifted and hearts heavenward. Between toe-tapping numbers like “That’s When the Angels Rejoice,” and lyrically rich ballads like “I Then Shall Live,” the banter between guitarist Kevin Williams and Bill Gaither proved Proverbs 17:22 true. The presence of the Holy Spirit was palpable as the power of God worked through the worship to position the people for the preacher of the hour: Pastor Paul Sheppard. 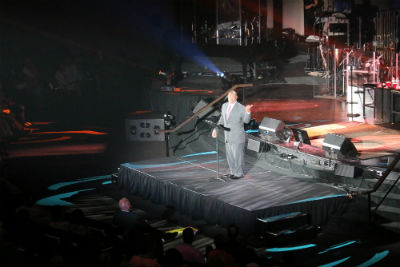 The senior pastor of Destiny Christian Fellowship, a thriving Church of God congregation in Fremont, California, pulled no punches. When he rose to the platform, he simply told it like it is. Drawing from three parables in Luke 15, he asserted that the church today, to our shame, is filled with modern-day Pharisees who want to keep our gatherings sanitized; comfortable “country clubs” of Christ-followers. “Jesus never repels messed-up people,” he proclaimed. “And if we do, we’re on the wrong side of redemptive history.” Thankfully, Pastor Paul described the constant role of God as one who is in the “search-and-rescue business.” If we want to be more like Jesus, we must have the same ambition. From the experience of a leader who has himself been restored by the wonderful grace of Jesus came a keynote message to the Church of God that both blessed and challenged all who gathered in the expanse of the sanctuary at Central Community Church.

Pre-convention training was abundant and practically useful for all who made such events a priority. The CARE Seminar, the Chaplains training, the Gravity Leadership event, the gatherings for healthy leaders and churches, and the CHOG Table Outcomes each garnered interest and, in most cases, capacity or standing-room only crowds at the DoubleTree Hotel, just minutes away from Central Community Church. Most indicative of the energy and interest leading up to Reclaim 2017 was the capacity crowd at the DoubleTree for the Town Hall session with Jim Lyon. The room prepared in advance for the event wasn’t nearly sufficient for the number of people who showed up. Even after the partition was removed to expand the size of the room, pastors and laypeople were still standing around the perimeter. Those who came to the question-and-answer session were not disappointed; feedback following the gathering suggested that many were greatly encouraged by the stories and statistics of God at work in the Church of God movement. 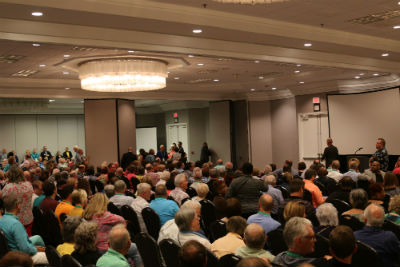 Photo: Opening the partiion at the DoubleTree Hotel.

In a poignant and celebratory moment at the conclusion of the kickoff service, special recognition was given to general director emeritus Ronald V. Duncan and his wife Martha for their extensive contribution and impact on the Church of God. Once again, the crowd rose to its feet.

Learn more about Church of God Convention 2017 at www.chogconvention.org.