CHOG Convention 2015: What the Buzz is About 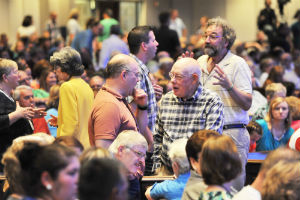 The Be Bold fervor that has swept across the Church of God over the past six months originated at the convention in Oklahoma City in June 2014. A new wind began blowing in the movement that has continued to gain strength to propel us into a brighter future together. Perhaps none can better express this fresh spirit than those who attended the landmark Oklahoma City gathering.

“Attending the convention in Anderson for the past forty-six years was wonderfully comfortable, and it felt like home,” Larry and Che-Che Mobley, pastors of St. Andrew Church of God in Camden, South Carolina, explain. “However, it took only a few minutes of greeting our brothers and sisters that first night in Oklahoma City to remember that the fellowship of the church has nothing to do with location and everything to do with relationships and spiritual refreshment. We were blessed by every aspect of the 2014 convention and have already registered for OKC 2015.” 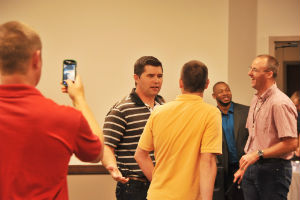 Melissa Pratt, pastor of Teays Valley Church of God in Scott Depot, WestVirginia, is still feeling the ripple effects of the first convention in Oklahoma City. “The 2014 convention was a time of inspiration, hope, and challenge,” she explains. “We heard how God was at work around the world and here in the United States in ways that moved my soul and inspired my thoughts to action. My husband and I left feeling encouraged not only about the Church of God movement and its forward, bold direction, but also about our local church. We came home resolved to keep seeking God and ways to bring transformation to our community. The stories we heard there still run through my mind as a reminder that with God all things are possible!”

Milton Grannum, who leads New Covenant Church in Philadelphia, Pennsylvania, was blessed tremendously by the 2014 convention. He’s also got a very special reason to look forward to 2015. “A number of our church leaders and I went from Philadelphia to Oklahoma expecting a significant experience with God and with his people,” Milton recalls. “The fellowship, the newness of the location, the creativity, and what I considered to be significant spiritual breakthroughs, were all awesome and far beyond our expectations. We went for a blessing, and returned encouraged, inspired, and renewed. I believe that the special privilege extend to our daughter Gillian the opportunity to be one of the speakers for our 2015 convention will be a blessing to everyone who attends. Plans are already being made for Philadelphia to have its largest number ever at the 2015 convention!”

Tickets are available now at www.chogconvention.org for Church of God Convention 2015, June 22–25 in Oklahoma City. While at this online hub for all things Convention 2015, check out the list of featured speakers and worship leaders. Has your pastor heard the buzz? Are your Christian brothers and sisters at church aware of this opportunity? Share this good news with them today!