By chogministries
Posted April 7, 2014
In All Church of God
CHOG Convention 2014: Reformation Roots in Oklahoma2014-04-072014-04-07https://www.jesusisthesubject.org/wp-content/uploads/2016/07/ChogLogo-Light.svgChurch of God Ministrieshttps://www.jesusisthesubject.org/wp-content/uploads/2016/07/ChogLogo-Light.svg200px200px 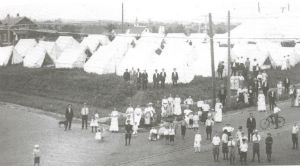 Photo: A Church of God camp meeting that took place in Oklahoma City, 1920.

“Holding the annual convention in Anderson has been a time-honored tradition,” Church of God Historian Merle Strege reflects. “Although two-thirds of the constituency still resides east of the Mississippi, the west has contributed significantly to the life of the Church of God. Important leaders like Nora Hunter and Otto F. Linn were nurtured in congregations not far from the Santa Fe Trail. John Morrison was serving as a pastor in Delta, Colorado, when he was called to teach at Anderson Bible Training School. Hunter’s early evangelistic partner, Lena Shoffner Matthesen, played an important role in the Church of God in Oklahoma. From Oklahoma, many Church of God folk migrated west and formed new congregations in California and Oregon.” 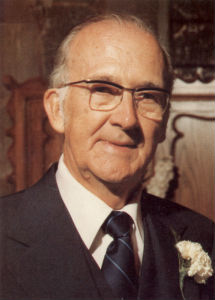 Renowned CBH speaker Dale Oldham was born in Oklahoma. In Giants Along My Path, Oldham recounts his growing-up years near Ripley, Oklahoma. It was out of Mary Cole’s leadership that the ministries of several of early Church of God leaders, including Oldham and John Morrison, were born. Modern research suggests that when D. S. Warner reached many of the western locales, he ministered in churches already established by the Coles. By 1903, a man named J. A. Carter, captivated by the message of the Church of God brought by “flying evangelists,” accepted a call of God to relocate to the city. According to The Quest for Holiness and Unity, Carter moved to Oklahoma City, where he met Ed Matthesen, who would later marry Lena Shoffner. Remembered for her impassioned 1897 Alabama camp-meeting sermon that prompted the tearing down of the “middle wall of partition” that divided blacks and whites in worship, Lena Shoffner became the first Church of God pastor in Oklahoma City in 1904.

Photo: Crossings Community Church (Oklahoma City) is just one example of the vibrant Church of God community in Oklahoma today. Crossings will make history as the host congregation for the CHOG Convention 2014, June 23-26. Register at www.chogconvention.org!