By chogministries
Posted June 2, 2015
In All Church of God, Northeast
CHOG Congregations Offer Hope, Healing for Baltimore2015-06-022015-06-02https://www.jesusisthesubject.org/wp-content/uploads/2016/07/ChogLogo-Light.svgChurch of God Ministrieshttps://www.jesusisthesubject.org/wp-content/uploads/2016/07/ChogLogo-Light.svg200px200px

It’s been all over the news. You’ve no doubt seen the coverage of the protests and the riots that rocked Baltimore, Maryland, for several weeks. On April 19, 2015, twenty-five-year-old Freddie Gray died following injuries sustained while in police custody five days earlier. Navigating the maze of media punditry has been no easy task in the weeks since the tragedy. Regardless of one’s opinion on the matter, one thing is abundantly clear: where and when Jesus Christ is the subject, light has permeated the darkness. Though it was the looting and hostility that dominated television screens across the country, our Church of God congregations on the ground tell a different story—a story of hope and healing.

Celebration Church at Monroe Street is forever grateful to God for his hand of protection—no one in the church suffered personal injury or property damage, the church building was not damaged, and all the youth of the church were accounted for—not one involved in the looting or acts of violence. Celebration Church at Monroe Street is situated no more than five minutes from the corner of Fulton Street and North Avenue, a corner that was broadcast into living rooms across America through much of April. It was at this street corner where people witnessed a burning car and the lineup of police dressed in riot gear while enforcing the citywide curfew. The most remarkable developments related to this story, however, received little, if any, attention from the reporters and camera crews.

While CNN, MSNBC, and Fox were covering the heated encounters and tense skirmishes, incredible things were taking place in the hearts of young people only a few blocks up the road. Because of the outbreaks of violence, local schools had shut down on Tuesday, April 21. Celebration Church at Monroe Street saw an opportunity to love their community with God’s love. “We were blessed to have more than fifteen youth come to the church at 3:00 PM on a Tuesday and have a safe place where they could express how they were feeling about Mr. Gray’s death, the protest, the police, the looting, the violence, and their ideas on the solutions needed for the problems we are facing,” Bob Washington, lead pastor, explains. “We were also able to minister to them, and they were greatly encouraged. I was extremely proud of these young people and how they expressed themselves. They are brilliant!”

Near the onset of the tragedy, Celebration Church at Monroe Street held their first-ever “Better You” conference, an event that focused on improving one’s spiritual, physical, and financial health. In stark contrast to the publicized violence, the community came together on this day to improve the lives of individuals, and ultimately, society. The church also held a prayer meeting wholly devoted to the needs of the city of Baltimore, and on April 25, rallied the congregation for a spontaneous community service day. Though the world may not have seen Christ’s love on full display over the networks, the Baltimore itself couldn’t help but notice the church’s love for everyone. Pastor Bob Washington was also one of hundreds of Baltimore pastors to gather at several other area churches for special times of prayer during and after those tragic days.

Jeff Tomlinson pastors another area Church of God congregation. He also participated in prayer services focused on the needs of the city. The Church of God at Dundalk is just a few blocks from the edge of Baltimore. Though this congregation was also not directly affected by the riots, many there experienced the fear that such events can ignite. He sees the tragedy as speaking to “the deeper issues in the city of Baltimore.” Jeff continues, “The ministers in the city, and some from the county, have engaged in prayer and are trying to find ways to bring the power of God to bear on the issues underneath the riots. There are many godly and sincere Christians in the city who want to see real change. While the media focused on the violence and rioting, which clearly were wrong, there have been many peaceful protests, as well.” 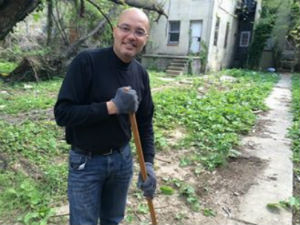 When asked about his prayer for the city of Baltimore, Jeff Tomlinson says, “That God would use these events to bring about justice and transformation in the city, among its leaders, in the city police department, and among the people of Baltimore. My prayer for our nation is that the changes that take place here might spread throughout the country into other cities where these types of conflicts have happened.”

Bob adds, “We believe that, as the church, we need to be a part of the process to positively affect the community we are in and, with much prayer, create an environment that welcomes the presence of Christ, his power, and his purpose.”

There’s no question in the minds of our local Church of God pastors that people of all backgrounds, cultures, and levels of authority in government are working together to bring positive change in Baltimore. Though many across the country have cast the city of Baltimore in a negative light, within Maryland’s most-populated region, God is up to something redemptive, restorative, and remarkable.