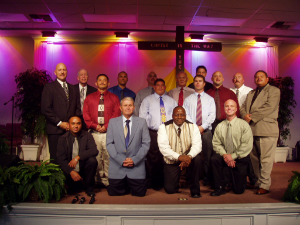 Crossroads Community Church of God in Yuba City, California sees an often overlooked need in our culture today—ministry to men. Specifically, they’ve recognized a void in outreach efforts to men who have hit rock-bottom, given their lives over to drugs and alcohol, and have lost all hope for recovery. After just a few years in operation, Joshua House has celebrated men who have stepped up to the plate, broken free from addiction, acquired jobs, and reunited with their families. For these men, however, the road to recovery is not without its twists and turns.

Residents of Joshua House commit to a twelve-month intensive program, complete with a rigorous curriculum and communal living. As an outreach of Crossroads, this men’s center currently shelters and supports twenty men at a time through transitional housing under the banner of Christ. “Satan has tried to destroy these guys,” Jim Clark, senior pastor of Crossroads, explains. “We’ve got to clothe them and feed them. Most of these recovery guys don’t have money. They’re at rock-bottom.”

Admission to Joshua House requires completion of a discipleship course similar to that of Teen Challenge. A limited staff, including a former probation officer, licensed counselor, and corrections placement officer, keep the house monitored around the clock. Family and friends cannot visit the residents during their stay, and there’s even a blackout period of a couple of months at the beginning during which calls and other 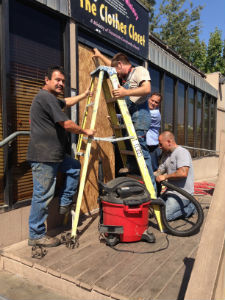 communication cannot be placed to people outside the facility. The blackout allows for focus, ensures serious study, and blocks out the negative influences that brought them to such a place of need in the first place.

But these staff aren’t there just to enforce the rules. They love these guys. “This is a tough program,” Jim explains. “They buy into it for a year, and some don’t make it. They’re tested for drugs and alcohol on a regular basis. But some of the guys that stumble do come back. They’ve tasted the other side and they discover they really don’t want to go back to their old habits. It’s hard work, but we stick with them when they fall away. We work hard to redeem them.” The staff also teach the men a variety of job skills and help them obtain work. By the time they leave, they’re ready not only to love and care for their families but also to be productive members of society.

“Ministering to men is hard, and I don’t want to minimize that,” Jim reflects. For the men, you have an idea in your mind that they won’t respond because they’re not emotional, etcetera, but they will respond. When they’re at rock bottom, God will get their attention. There’s got to be a ministry that welcomes and loves them.”

Crossroads Community Church rejoices in successful ministries to every demographic. Pastor Jim is a firm believer that God’s people must get outside the church and transform their communities. Joshua House was just one specific door 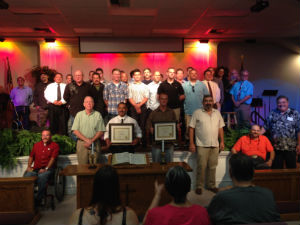 God opened for the congregation—a door beyond which Jim admits he was initially unsure.

“It was four years ago at our camp meeting. I had served on the board for another men’s center and had become convinced that more types of ministry like this were needed. The property became available on a repo sale. We had five days to back out and five days to close. And it happened to be when Jim Lyon was doing the camp meeting. His messages were about walking through the open door. I asked Jim, ‘What if it’s the wrong time?’ He told me that God doesn’t open doors at the wrong time. I called the board and told them we had no choice. As a result, I see guys today that are on fire for God. They’re involved in ministry. They’re involved in worship teams, Bible studies, prayer meetings, and men’s groups. I see them bringing their families to church. You talk about something that gets the church excited!”

“I can imagine as we get near heaven, seeing a great clothesline stretched out with open doors attached to it—doors that people didn’t step through.” —Jim Lyon, Family Camp at Diamond Arrow, northern California (Summer 2010)

Change the World with the Church of God. Visit www.JesusIsTheSubject.org for details.