By chogministries
Posted November 18, 2021
In All Church of God, CHOG
Children of Promise Embraces New Season of International Ministry Excellence2021-11-182021-11-18https://www.jesusisthesubject.org/wp-content/uploads/2016/07/ChogLogo-Light.svgChurch of God Ministrieshttps://www.jesusisthesubject.org/wp-content/uploads/2021/11/children_of_promise_international_visit_adj.jpg200px200px

A lot has changed since 1992. More often than not, those ministries which flourish today have adjusted and adapted to the gradual, yet substantial shifts in the cultural, political, technological, and ecclesiastical landscape. Over the nearly three decades since Children of Promise was founded, the leadership, location, and look of the child sponsorship ministry of the Church of God has changed. In the past couple of years alone, several significant changes have ushered the organization into a new season of international ministry excellence. As the number of sponsorships continues to rise, one thing, though, has remained the same: the incalculable impact on the lives of children and their families.

When Paul Maxfield retired as director on September 30, 2019, Mike and Heather Webb received the baton of leadership at Children of Promise. Maxfield had served during a season of growth that followed on the heels of a period of establishment and expansion under the founders, Sidney and Jean Johnson. One of the most visible recent changes to the child sponsorship ministry are Mike and Heather Webb, two vivacious leaders eager to take the job, yet humbled by the magnitude of responsibility and the opportunity to succeed heroes of the faith.

“Gratitude is the first word that comes to mind,” Heather says, as she considers the honor of assuming her present role. “The Johnsons,” she continues, “set up Children of Promise from the very beginning in stark contrast to the prevailing missiology of the time. Empowering women, for example, and making sure girls were equally supported alongside boys, as well as making sure the ministry was birthed out of the local church, provided a strong foundation. Then, the Maxfields grew the organization to a place of great strength during their tenure. To be able to stand on the shoulders of these giants of faith—these incredible missiologists and kingdom workers—is very humbling and joy-filling.” 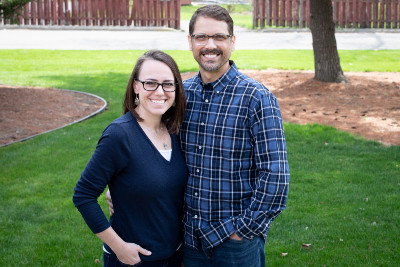 Mike chimes in. “Each former leader brought to the table something that was necessary for that time in the history of Children of Promise,” he explains. “The Johnsons laid the groundwork and the Maxfields built heavily upon that. We’re coming in at a time when what’s needed is to find new and compelling ways to tell the story so people can know about it and participate in an amazing ministry.”

The Church of God knows the story of Children of Promise, though, don’t we? Actually, there are far too many in our midst that don’t yet know about the ministry, its incredible results, and what sets it apart from some of the widely advertised and well-known child sponsorship programs based in North America. Heather remarks, “The methods we choose to utilize are intentional as we realize we have to do what we can to reach a different, younger demographic of people who are perhaps unfamiliar with us.”

Speaking of different methods, that’s another one of the obvious changes Children of Promise has undergone. Glance at the new logo, website (including the relevance of the website address), social media channels, email communication, and video newsletters, and you’ll note the fresh and contemporary relevance of design, language, and format. Mike couldn’t be more pleased.

“The whole rebranding experience has been a big win for us because of the expertise of the people we brought in to help,” he reflects. Citing their partnership with Joe Watkins for the logo design and branding, as well as the hiring of Kyle and Jessica Hayes, Mike Webb expresses enthusiasm in these developments. He continues, “Not only do we have a new logo, but also through the process we were able to home in on who we are and what we’re all about. The Hayes family have proven the perfect choice to help us communicate it.”

An overview of the changes at Children of Promise would be incomplete without mention of the all-new Gap Fund. Already, the novel idea has become popular with donors for its accessibility to everyone, regardless of giving level. Commitment to a sponsorship threshold and timeframe formerly limited some donors from directly supporting children. Now the Gap Fund allows individuals and churches to give any amount at any time and know that the dollars will directly support sponsored children who have “fallen in the gap” between need and sponsorship support. 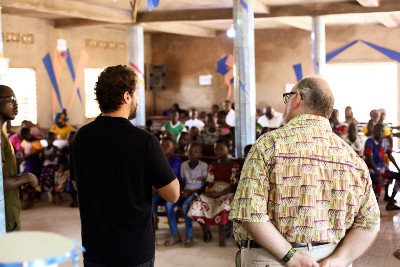 Mike Webb on an international Children of Promise visit.

As former missionaries with Global Strategy, including their leadership as regional coordinators for Africa, Mike and Heather Webb were uniquely qualified to lead Children of Promise into the future. But at the beginning, the two weren’t so sure. They had enjoyed fulfilling their divine call to the world’s second-largest and second-most populous continent on earth, and they weren’t immediately confident that season had come to close. But a few weeks in prayer and consultation with trusted voices led to their blessed assurance that were about to begin of a new season.

When people ask Mike and Heather Webb what sets Children of Promise apart from other child sponsorship ministries, they’re delighted to respond. Mike even says it’s one of his favorite questions to field. “I think we are the most compelling because of the way we function as a locally shaped, globally supported ministry,” he says. “We don’t have employees in offices around the world. We just work in partnership with local churches already engaged in their communities. We support them as they support their communities. Children of Promise is a local ministry, infused from the outside with the necessary resources. That’s a different approach.”

Heather agrees heartily. “The way I’d describe it is the difference between a parachurch organization and the ministry of a local church. Children of Promise is an outreach ministry of the local church. The pastors and lay leaders are the ones who are extending care. It’s viewed in the community as the ministry of the church, not some outside group. As a result, the people who receive care see the local church helping them, not the offices of Children of Promise in Anderson, Indiana.”

The most recent change at Children of Promise is one of proximity—proximity to the other agencies of the Church of God based in Anderson. Though the offices of Church of God Ministries, Warner Christian Resources, Christian Women Connection, and Servant Solutions relocated their offices to the southwest side of town five years ago, Children of Promise opted to remain in their longtime neighborhood. This summer, Children of Promise packed their belongings and moved into the Church of God Ministries building near the Anderson University Flagship Center. The potential for greater collaboration and partnership prompt both Mike and Heather to exclaim, “We love it here!”

In 2022, Children of Promise will pull out all the stops to celebrate thirty years of international ministry excellence. Stay tuned for announcements about opportunities to celebrate with us!

Learn more about Children of Promise at www.childrenofpromise.global. 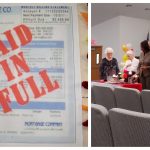 Beyond Grateful: Kansas Church Thankful to Be Debt-FreeAll Church of God, Central, CHOG 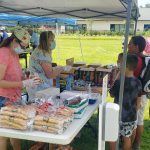 In the Interim: Florida Church Maintains Mission Between PastorsAll Church of God, Change the Story, CHOG, Southeast, The Way