By chogministries
Posted December 30, 2013
In All Church of God, Colleges & Universities
Chick-fil-A Opens Restaurant at AU2013-12-302013-12-30https://www.jesusisthesubject.org/wp-content/uploads/2016/07/ChogLogo-Light.svgChurch of God Ministrieshttps://www.jesusisthesubject.org/wp-content/uploads/2016/07/ChogLogo-Light.svg200px200px 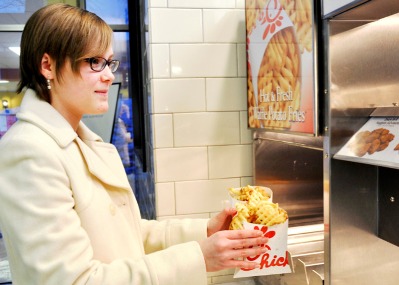 School food is not known as being a first choice for a meal by most students, but that was before Anderson University brought a Chick-fil-A to campus.

“A lot of my friends like to eat here twice a day,” said Abigail Robertson, 19, an Anderson University student studying elementary education.

Chartwells Dining Service has partnered with the national chain to create a licensed location called a Chick-fil-A Express in the Raven Haven.

The menu for the restaurant is limited but includes chicken sandwiches, nuggets and their famous waffle fries.

Robertson was ordering at the restaurant for the first time on Friday and said the limited menu was not an issue.

“I think I would have gotten chicken nuggets even if they had a full menu,” she said.

There was quite a bit of excitement among the students about the new restaurants that opened in the Raven Haven on Dec. 10.

“The line was all the way out the doors,” said MyLynn Allen, 18, an Anderson University student originally from Toledo, Ohio.

Sabrina Yeary, 19, from Bedford, who is studying to be an elementary teacher at the college, said the new restaurant options are great and she especially enjoys Olive’s menu.

“If I wasn’t an athlete, I would eat Chick-fil-A every day,” she said. “The waffle fries are the best.” Yeary said she loves the fast and friendly service at the eateries.

“College kids are like this,” she said snapping her fingers. “We need our food to go, and we need it quick. They have good management here.”

Asche-Lee Robinson, 18, from Gary, who is studying psychology at Anderson University, said the customer service is excellent and she is not worried it will be affected by outside people learning the restaurants are open.

“There are already a bunch of people that are here and it is still fast,” she said.

According to Chick-fil-A Inc., the company is planning to open an additional 25 licensee locations in 2014, but the locations for the new restaurants are still being determined.

Chartwells officials say they plan to close the facilities during the holiday break for remodeling and reopen on Jan. 13.

Robinson was distressed to learn her meal from Olive’s on Friday was going to be her last until mid-January.

— Traci Moyer is a reporter for The Herald Bulletin. Story republished with permission.