Whether in Washington, D.C., or half-way around the world, Church of God chaplains continue to change the culture around them—for the better. As representatives of Jesus first, but also the Church of God movement, these courageous individuals sacrifice time with their families, forsaking the familiar and walking into the unknown, bringing the peace of Christ into often warring hearts, if not warring countries. Through counseling, worship services, advocacy, and much more, Church of God chaplains leave an impression on the way soldiers and systems function, whether in training, on the battle lines, in policy-making, at correctional facilities, or in hospital halls. Recent developments in D.C., and a closer look at the life and ministry of a recently deployed Church of God chaplain, reinforce the need for prayerful and financial support of such men and women called to vital ministry in nontraditional settings.

While the spotlight in the nation’s capital was on impeachment proceedings during the weeks leading up to Christmas, history was made of a different sort. Same city, many of the same politicians involved, but this bit of breaking news was the kind military chaplain Gary Carr describes as “one area where you can clearly say Church of God Ministries was directly responsible for influencing change in the National Defense Authorization Act.”

On December 20, 2019, the 2020 fiscal year NDAA was enacted, but brought a change with it that could have resulted in government overreach into freedom of religion. Specifically, the cross badge worn by chaplains, signifying their divine call and the affirmation of their ecclesiastical endorsing body, would have been granted to chaplains only upon completion of chaplain training administered by the Air Force. Gary Carr explains:

“The conflict of interest is the fine line of separation between government involvement in religious accommodation and the establishment of a government religion as prohibited in the First Amendment to the Constitution. Chaplains serving the Church of God wear a Christian cross on their uniform. Chaplains are entitled to wear that cross and their rank device upon receiving their commission. It is not dependent upon finishing a course of instruction or military orientation at the chaplain school. As such, the military commissions [already] qualified clergy; it does not make them clergy members.”

As the military endorsing agent for the Church of God, Gary Carr represents the Church of God to the Department of Defense, advocating for the free expression of faith for its members serving in the military. Because of his hard work, along with representatives of other faith-based organizations and denominations, chaplains now enjoy another layer of protection for their freedoms. “It matters because it prohibits the chief of chaplains from getting enmeshed with a ceremony that is the right of the religious organization and not the government,” Gary further explains. “Though it may have had merit, on the surface, as a way to commemorate successful completion of chaplain training, it crossed over into an area that is left solely to the domain of the endorsing organization.”

At the beginning of his exploration, Thomas knew God had called him to ministry, but at the time observed the traditional pastorate wasn’t the route for him. “Because military chaplaincy requires a seminary degree, the decision to pursue that is what opened the door for me to attend seminary at AU,” he explains. “In the years since, it has opened some very unique doors to minister to a wide range of people, many of whom might not ever walk through the doors of a church.”

In military chaplaincy, deployments generally don’t happen often, and sometimes several years pass between them. God opened the doors for Thomas to take a local pastorate, as well, with the understanding by the congregation that deployment was always a possibility. Stoneybrook Church of God in Bloomington, Indiana, would have to fill the pulpit during their pastor’s deployment, but the church would carry on, even recognizing their extended, missionary-like reach through Thomas.

Our chaplains deserve our support. The Middle East is his home-away-from-home right now, and like the soldiers he ministers to, the greatest strain isn’t heightened alert levels or the current political climate; instead, it’s the distance that separates family. Like all Church of God chaplains, Thomas Horrocks is an extension of the local church’s ministry, to the military in his case, but for others on a hospital bed, in a correctional facility, or laboring within their work environment. Even as they provide various forms of religious support, Church of God chaplains are called by God and endorsed by Church of God Ministries to take the love and message of Jesus wherever they go.

Learn more, and discover opportunities to come alongside our chaplain ministries, at https://www.jesusisthesubject.org/chaplains/. 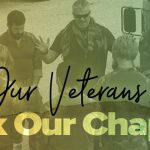 THANK OUR VETERANS, THANK OUR CHAPLAINSChaplain Ministry, Church of God 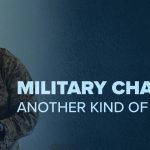