By chogministries
Posted January 14, 2013
In All Church of God
Celebrating the Message of Martin Luther King Jr.2013-01-142013-01-14https://www.jesusisthesubject.org/wp-content/uploads/2016/07/ChogLogo-Light.svgChurch of God Ministrieshttps://www.jesusisthesubject.org/wp-content/uploads/2016/07/ChogLogo-Light.svg200px200px 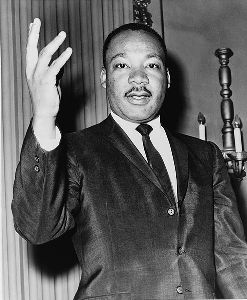 Martin Luther King Day 2013 is observed in the United States on Monday, January 21. The civil rights activist for whom the holiday is named not only preached the gospel but also championed peace and reconciliation in a world of incredible diversity. King’s message of hope was not just for African Americans, but for all people. On the Sunday before Martin Luther King Day, and through the month of February, churches recognize the achievements of King and other African Americans who have contributed to the church and society.

One Church of God congregation that annually celebrates the accomplishments of African Americans in our culture is Solid Rock Church of God in Kissimmee, Florida. Each Sunday during February, a picture and biography of a notable black leader is featured in the church bulletin. Black history trivia is featured, and the choir and worship team present a special song of African American heritage. The fellowship hall is turned into what they call a museum, showcasing displays about black leaders who have shaped the culture. On the final Sunday of February, the church will present a skit titled “If There Were None,” which dramatically demonstrates how our society would be different had it not been for the contributions of African Americans.

Looking around the congregation in February, it is not uncommon to see some of the ladies dressed in traditional African attire. In previous years, the church has also feasted on traditional Southern soul food. But the biggest component of Solid Rock’s Black History observance is the youth activities. 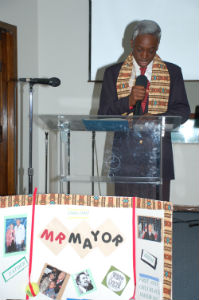 On the last Saturday of February, the youth of Solid Rock Church of God participate in a competition of creativity and spirit. The youth prepare in advance to present the story of African Americans who have contributed great things to society. They conduct in-depth research, bring props, and even dress like the persons about whom they will speak. Then each presenter is judged on creativity, presentation, content, and more.

Pastor Whitfield Blenman believes that observing Black History Month is important for African Americans because it brings about a sense of self-worth among youth. “The purpose behind what we do in the youth department is to stimulate creativity and help them realize they too can positively impact society. They can see that black people have done some significant things in the lives of people around the world.” He also believes that predominantly white churches could also benefit from recognizing this important time of year. “Our Anglo brothers and sisters are benefiting from the contributions of African Americans. It opens up their mind and appreciation. There are black people who have given and continue to give, not only in America, but across the globe. It’s important for us to be reminded.”

One of the easiest ways churches can observe the achievements of Martin Luther King Jr. and other African Americans is to print brief bios of these leaders in the weekly bulletin. But Blenman, whose church is composed of multiple cultures, urges churches to be careful and to do everything in love. “We have to be careful. We don’t want to offend anyone or make them feel like they are not a part of the church. I don’t think any church should function like a ‘typical’ black church or a ‘typical’ white church. We should function as the church! With Martin Luther King, it wasn’t just a black thing. There were also Anglos who participated. Martin Luther King Day is a reminder of how he brought about a coming together of all people.”

Click here to browse Warner Press bulletins (available for purchase) that celebrate the contributions of African Americans to church and society.