Celebrating Church of God Women in Leadership Around the World

A collage of Dorothy Colney, Mailes Ndao, and Courtney Rice.

At the turn of the twentieth century, labor movements across North America and Europe were gaining momentum, and the landscape of a post-war society was beginning to shift. Birthed out of this movement came women’s suffrage in the western hemisphere, and International Women’s Day along with it. In the years that followed, this worldwide observance has taken on global significance for women in modernized and developing countries alike, seeking to rally around the common goal of female advancement, both politically and economically.

The Church of God has historically embraced women in positions of leadership within the church, and continues to strive to encourage them in their callings—not because our culture demands it, but because we as believers acknowledge the innate likeness of God is revealed in both women and men, and that both genders are not only created, but called to be the hands and feet of Jesus in the world.

“I am worthy of having a place at the table because the Lord is the One who empowers, encourages, and equips me to strive after the kingdom,” says Courtney Rice, a seminary student at Anderson University School of Theology and Christian Ministry.

Having first felt a call to ministry during her undergrad at Anderson University, Courtney recalls a handful of experiences where her aspirations to become a pastor were questioned and, in some cases, even challenged. “I have been in situations and positions of leadership when I was not well-respected—likely due to me being a woman—and that has been disheartening and discouraging at times.”

One of Courtney’s mentors, and a renowned speaker and leader in the Church of God, Ann Smith, encouraged Courtney not to let these outside prejudices deter her. “Ann once told me to remember that everyone in ministry is wounded, and therefore, I cannot walk around like I have a chip on my shoulder simply because I am a woman,” Courtney says. “Rather, I can acknowledge that there have been, and will continue to be, moments where people doubt my call and gifts because I am not a man, but at the end of the day, they were never the ones to declare my call in the first place.” 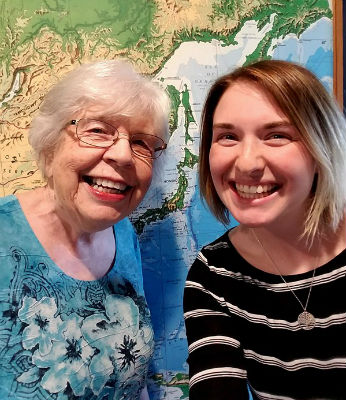 Courtney Rice (right) with one of her mentors, Ann Smith.

Courtney’s testimony echoes true for countless other female leaders who have faced similar trials in pursuit of their call to ministry. Mailes Ndao, acting representative for the Church of God in Zambia, as well as the appointed country director for Children of Promise in her region, is among them. Mailes, however, recalls a unique experience wherein her brothers in Christ were the very people championing her call. “I felt celebrated when the men in my church recognized my calling and gave me the honor of leading them,” she says. “I felt celebrated every time they affirmed my leadership.”

“God calls both women and men to actively participate in building up the kingdom of God. We need each other, and we need to be for each other,” Courtney says, echoing Mailes’s sentiments.

Mailes’s story is an extraordinary one—beginning with a humble prayer that ultimately changed her entire community for good. In 1992, Mailes’s daughter Charity became very sick. Everyone in Mailes’s village, including her own mother-in-law, encouraged her to take baby Charity to the witch doctor to be healed, certain that the cause of the illness was consequence to some sort of witchcraft. Mailes and her husband, who were both new believers at the time, refused to comply, deciding instead to pray together over their sick child. “The Lord answered our prayer and this brought my mother-in-law to believe in Jesus Christ and receive him as her Lord and Savior,” Mailes recalls.

Later that week, the entire village gathered at Mailes’s mother-in-law’s house. “They wanted to hear about this God who answered prayer,” she remembers. “I shared my testimony of receiving Jesus Christ as my Lord and Savior, and the miracle of healing of our child—the miracle that every one of them had seen with their own eyes.” 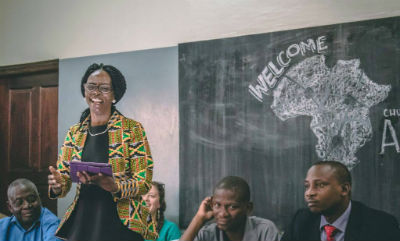 It was during this season of countless miraculous answers to her most desperate of prayers that Mailes began to feel a call to ministry. She and her husband responded to God’s prompting by moving to Lusaka, Zambia, where they co-pastored a church and where Mailes served as the national women’s leader. Under their leadership, the quaint little church that started with only five people in regular attendance multiplied to 250.

A fervent advocate for women and youth, Mailes says, “I represent the woman at the well and the woman who anointed the feet of Jesus and wiped his feet with her hair; the women that met with Jesus Christ and left everything and ran to tell everyone, ‘Come and see.’”

Dorothy Colney, senior pastor and president of the Church of God in Myanmar, is yet another leader among leaders for the international Movement, who strives to emulate the enduring faith of the Bible characters of old. Like both Mailes and Courtney, Rev. Dorothy has given her life over to ministry and, as a result, has fostered robust growth in churches and communities across southeast Asia.

Working with Campus Crusade for Christ (CCC) in Burma, Dorothy has trained thousands of college students and church laymen for evangelism, translated a variety of CCC promotional material into Burmese, and preached at more than thirty open-air crusades, where countless listeners received Christ as their Savior for the very first time.

From there, Dorothy Colney and the CCC recognized a need to inaugurate a more permanent church ministry in the area, and fasted for seven days to decipher the Lord’s leading. A vacant house was provided to them by a neighboring pastor, which became the first of nine churches they have established. Ten years later, Dorothy was ordained at the Asia Church of God Conference in the Philippines.

“By the grace of God, my education [and] experiences with the Campus Crusade for Christ equipped me to do well in evangelism, discipleship, ministry management, and leadership,” Dorothy reflects. “All these helped me to serve at the church ministry effectively [and] gave me vision to disciple our members.” 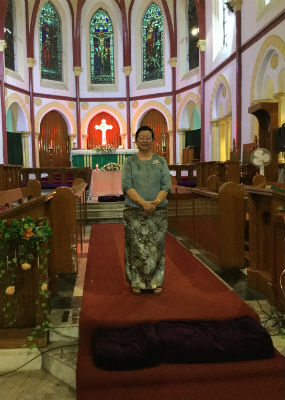 As the world celebrates a day that honors and highlights women of strength, courage, and compassion, we too have the unique opportunity to continue this vital conversation by bringing it into the sanctity of our churches and homes. “My hope for the future is to see more women elected to the highest offices in the church,” Mailes says. “I hope to see women liberated in cultures that look down on women. I hope to see more women and youth voices heard by including us in decision-making committees.”

Already the Church of God is blessed by female and male leaders alike, who are spearheading these integral steps toward inclusion and egalitarianism within the church. It is time that we all stand with them, and for them.

“Being a woman has greatly increased my passion and heart for pursuing gender equality in the church, and my intentionality in advocating for people to live into the ways they have been uniquely gifted and called by God to serve the body of Christ and the world,” says Courtney. “I continue to learn, live into, and boldly proclaim that my call is not hindered, based upon, or restricted by my gender, but is confirmed and guided by the One who has called me to serve, love, and proclaim new life for the brokenhearted, the outcast, and the oppressed.”

Across North America, and around the world, God is on the move in the Church of God. Join the movement. Reach our world. Donate today at give.jesusisthesubject.org. Learn more about the international scope of the Church of God at www.chogglobal.org.