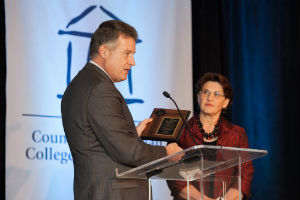 Warner Pacific College was chosen for the award in recognition of its programs in the area of racial and ethnic diversity, including the innovative Urban Service Track of the Act Six Leadership & Scholarship Initiative, which welcomes cadres of students from diverse backgrounds to the Warner Pacific community, providing academic support and full-need scholarships to the next generation of urban leaders.

The College was also commended for embracing an urban and diverse identity through a newly re-tooled mission statement. Over the last ten years, Warner Pacific College has seen the number of students of color grow from 13 percent to 28 percent, well above the CCCU standard. The Warner Pacific Human Resources Department is also dedicated to recruiting and hiring faculty and staff members who fully embrace the mission of the College and reflect the rich diversity of the student body.  This commitment to diverse hiring practices was evidenced over the past year, as 43 percent of new hires were persons of color.

Warner Pacific recognizes that a commitment to diversity cannot stop at enrollment. That is why the College works with each student to ensure that their needs are being met financially, academically, socially and spiritually. To support this work, Warner Pacific College is implementing a multi-faceted plan that addresses poverty and prepares students to be servant leaders in the city of Portland and beyond, through:

•    Increasing access to urban, liberal arts education for students who never before could hope to attain an education from a Christ-centered, private institution.

•    Reducing barriers to higher education opportunities by, among other things, controlling tuition so that it remains 35 percent lower than our peer group institutions.

•    Improving persistence and achievement by providing academic, spiritual, vocational support, and mentoring so that students not only enroll, but succeed in graduating.

•    Developing skills and capacity for meaningful service as students are immersed in citywide internships, community service and other urban engagement opportunities.

“At Warner Pacific College, we are committed to ensuring that students from diverse backgrounds have the tools and opportunities they need to achieve their goals of higher education,” said Dr. Andrea P. Cook, President of Warner Pacific College. “As followers of Christ, we engage and embrace the city, with its wounds and extraordinary potential. Warner Pacific is a community that practices an ethic of inclusivity and diversity while addressing issues of regional injustice and educational challenges. We desire to serve as a force for positive change.”

The Robert and Susan Andringa Award for Advancing Racial Harmony celebrates the achievements of CCCU campuses in making progress in the areas of diversity, racial harmony and reconciliation. It was first awarded in 2000 as the Racial Harmony Award and was renamed at the 2006 International Forum in honor of Dr. Andringa, who retired that year. The award is consistent with the aims of the CCCU’s Commission for Advancing Intercultural Competencies, which focuses on issues that include racial/ethnic diversity.

The Council for Christian Colleges & Universities is a higher education association of 185 intentionally Christ-centered institutions around the world. The 116 member campuses in North America are all fully-accredited, comprehensive colleges and universities with curricula rooted in the arts and sciences. In addition, 69 affiliate campuses from 25 countries are part of the CCCU. The Council’s mission is to advance the cause of Christ-centered higher education and to help its institutions transform lives by faithfully relating scholarship and service to biblical truth.

Founded in 1937 in Spokane, Washington, as Pacific Bible College, Warner Pacific is a Christ-centered, urban, liberal arts college dedicated to providing students from diverse backgrounds an education that prepares them to engage actively in a constantly changing world. Learn more at www.warnerpacific.edu.