Carols of a Reformation

By chogministries
Posted December 14, 2018
In All Church of God
Carols of a Reformation2018-12-142018-12-14https://www.jesusisthesubject.org/wp-content/uploads/2016/07/ChogLogo-Light.svgChurch of God Ministrieshttps://www.jesusisthesubject.org/wp-content/uploads/2016/07/ChogLogo-Light.svg200px200px 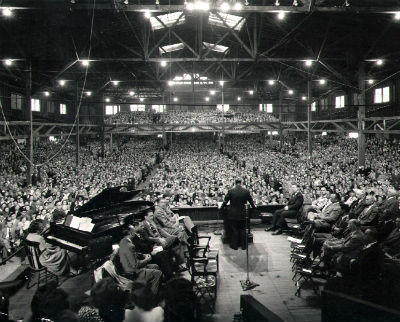 Editor’s note—This article from December 2010 was one of the first feature stories Church of God Ministries’ staff writer Carl Stagner ever wrote for the CHOGnews. This year, we bring it back for your Christmastime delight. Enjoy!

The Church of God is known for its singing. Early pioneers of the reformation movement expressed their joy in the Lord through the writing and singing of songs, such as “I’m Redeemed,” “A Child of God,” and “I Will Praise Him, Hallelujah!” Many of the heritage songs of the Church of God are still being sung today. But did you know that these heritage composers wrote Christmas carols? 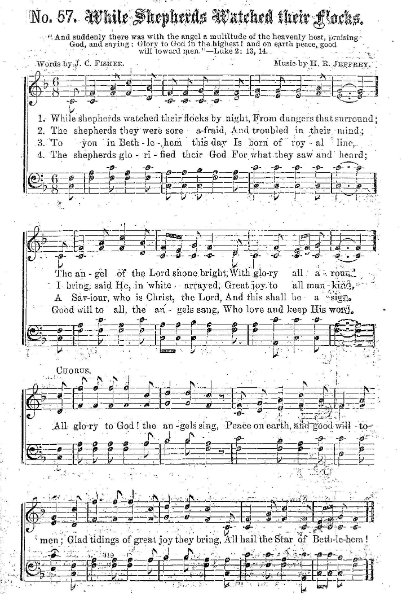 Research conducted in the Church of God Ministries library suggests that the first Christmas carol written by a Church of God pioneer was “While Shepherds Watched Their Flocks,” not to be confused with George Frideric Handel’s well-known classic. The words, penned by Joseph C. Fisher in the 1885 songbook Songs of Victory, were set to a tune composed by H. R. Jeffrey. Fisher’s more popular songs, also printed in this songbook, “I’m Redeemed” and “I Ought to Love My Savior” can be found in the most recent hymnal of the Church of God, Worship the Lord (1989). 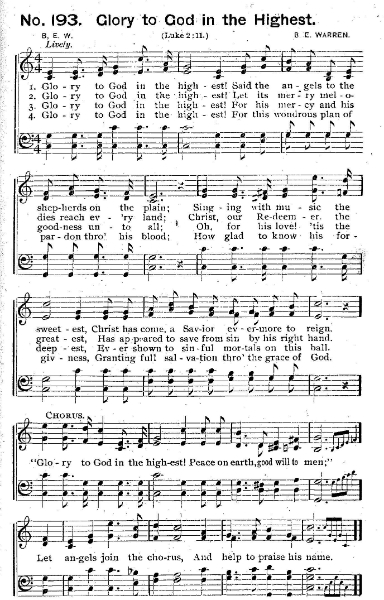 Barney E. Warren, the most prolific of the early Church of God songwriters, composed the melody and the lyrics of “A Child of God.” He also wrote “Glory to God in the Highest,” published by the Gospel Trumpet Publishing Company at Moundsville, West Virginia, in the 1897 songbook Songs of the Evening Light. The lyrics, in addition to describing the story of the nativity and sharing the gospel message, include early Church of God doctrine in the last verse: “Glory to God in the highest! For this wondrous plan of pardon thro’ his blood; how glad to know his forgiveness, granting full salvation thro’ the grace of God” (emphasis added). 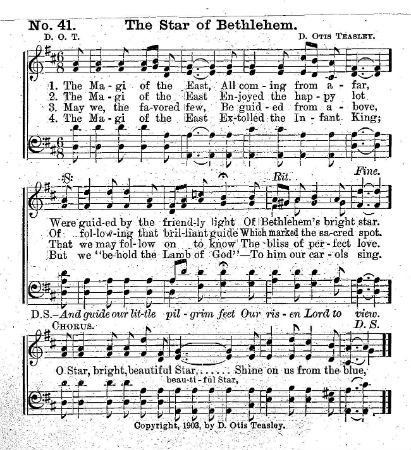 D. Otis Teasley, who wrote several popular songs, including “I Will Praise Him, Hallelujah!,” also wrote a song titled “The Star of Bethlehem.” Compiled in the songbook Youthful Praise (1903), the chorus of the carol supports the title of the songbook: “O Star, bright, beautiful Star, shine on us from the blue, and guide our little pilgrim feet our risen Lord to view” (emphasis added). 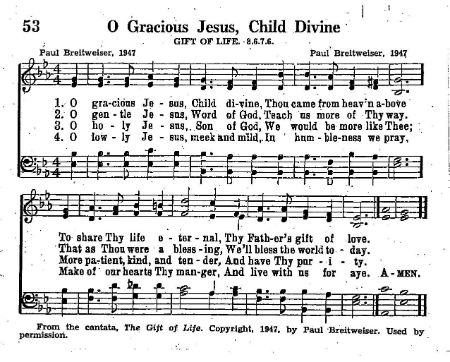 In 1947, Dr. Paul Breitweiser, the one-time piano teacher of Robert Reardon and Bill Gaither, secured the copyright for a Christmas hymn he had written titled “O Gracious Jesus, Child Divine.” As the director of the Park Place Church of God choir during the 1940s, and a longtime Anderson College music professor, Dr. Paul Breitweiser composed this hymn as part of a Christmas cantata that he called “The Gift of Life.” Just six years later, “O Gracious Jesus, Child Divine” garnered a place in the Hymnal of the Church of God. To learn more about Breitweiser’s Christmas cantata, contact Mary at 425-313-0254 or e-mail her at mbmcwhirter@msn.com. 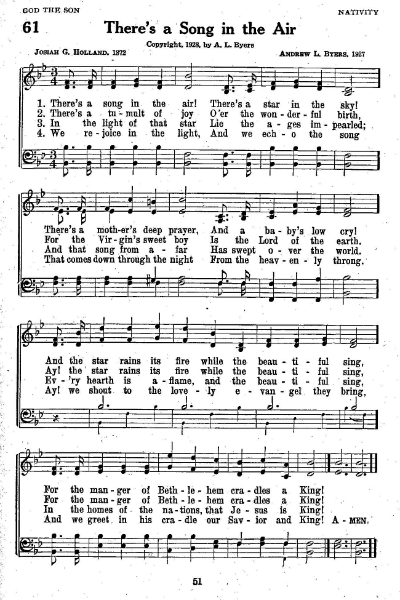 Of the early Church of God carols, perhaps the one that survived the longest, was Andrew L. Byer’s melody of the popular Methodist text “There’s a Song in the Air.” First published in the 1930 Warner Press songbook Hymns and Spiritual Songs, this melody was reprinted in 1953 Hymnal of the Church of God and again in the 1971 Hymnal of the Church of God. Several saints have considered this melody more singable than its popular counterpart. Mike Parks, of the Maiden Lane Church of God in Springfield, Ohio, commented on Facebook regarding the subject: “I love Byers’s version of ‘There’s a Song in the Air!’ I like the melody better than Harrington’s original (and it’s easier to sing, too).”

The contribution the Church of God has made to Christmas music has continued to this day. The 1989 Worship the Lord hymnal included two of Bill Gaither’s Christmas carols: “Glory in the Highest” and “He Started the Whole World Singing.” Curt Ferrell, [then] associate pastor of worship at South Memorial Drive Church of God in New Castle, Indiana, has written three carols, including “Come,” “Heaven and Nature Sing,” and “Then the Star Stopped.” Songs from the Heart, a songwriting contest held at the North American Convention in 2001, resulted in the writing of the following Christmas songs: “Let Us Adore Him,” by David Coplin; “Who Will Come?” and “Joy to the World,” by Gerald Fercho; “Come, Dear Savior,” by Nicole Yerden Wells; and “Heaven’s Promise,” by Tami Byrd.

No doubt, there are many more Christmas songs that were written by saints in the Church of God. May the songs keep coming!

Interested in joining brothers and sisters from across the country and beyond for an hour of just singing the heritage songs of the Church of God? The Heritage Sing returns to the Church of God Convention in 2019 (June 27–30 in Orlando, Florida). For more information, and to register for the convention, visit www.chogconvention.org.