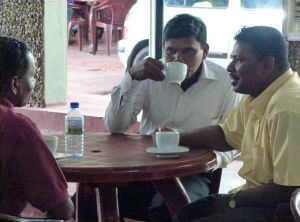 Our job as regional coordinators for the Asia–Pacific region takes on many forms, and many of the things we are involved in do not make for particularly interesting reading. But often, in the course of working with our national leaders to strengthen and grow the Church of God in Asia, we hear stories that inspire us and remind us of the caliber of people who benefit from the not-so-glamorous parts of our job.
Last month was the annual business meeting combined with a pastors’ meeting for the Church of God in Sri Lanka. There were several days of meetings in hot, sticky rooms on molded plastic chairs. Again, while important, that definitely falls into the category of uninteresting material for a newsletter. But after the meetings, and usually over a cup of hot tea, came opportunities to talk with pastors.

Pastor Nilanga is one of our newest pastors, and I was glad to get a chance to know more about him and his call to ministry in a country that is increasingly hostile to Christianity. When I asked him about his background, the reply I got was more than I expected from a quiet young man. Nilanga’s experience with opposition to the gospel started as soon as he became a Christian. His father immediately threw him out of the house, not wanting Christianity to taint their Buddhist home and thereby cause the family to lose merit in the next life. 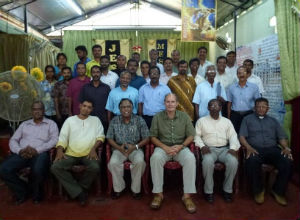 Having just graduated from high school, Pastor Nilanga had no means to support himself and ended up living on the streets of the village in a large cardboard box. This was a difficult adjustment, but he says he felt the strong presence of the Lord with him, and it was very clear that he was to serve God, not Buddha. He began to talk about Jesus to anyone who would listen, but soon the people of the village chased him away, throwing firecrackers at him. Nilanga later learned that his removal was ordered by local Buddhist monk.

Nilanga went to spread the gospel in another village, but the mayor treated him harshly. Nilanga spoke at length with the mayor about Jesus and how prayer could change his life, but the mayor continued to shout at him, ordering the evangelism to stop. It was not long, however, before the mayor came back to him and asked for prayer to be delivered from witchcraft and the spell that had been placed on him. The mayor became a frequent night visitor as he experienced the power of God in answered prayer. He wanted to know more, and eventually the mayor brought his whole family to meet the man in the cardboard box.

God’s plan for Nilanga continued to unfold as he soon enrolled in a theological college and trained to be a pastor. Today, he pastors a Church of God congregation where the village mayor—and now the former village drunk as well—are leaders in the church!

When I asked my initial question, I was not expecting to hear such an incredible story or to feel so humbled by a man who was willing to live in a box in order to live out his Christian faith. When people like this are the ones in the trenches, it puts sweating on hard plastic chairs into perspective and makes the things we do to ensure a healthy church structure worth it.

Please pray for us and for the church in Sri Lanka as we work on financial issues with them and a major leadership transition in the near future.