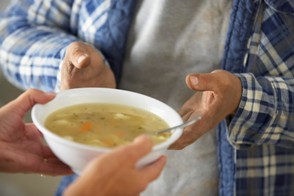 Souls saved, divine healings, increased attendance, growing diversity, beautiful unity, and a powerful moving of the Holy Spirit are all signs that God is doing a miraculous work at Pleasant Valley Church of God in Vernon, British Columbia. Last year, the leadership at Pleasant Valley recognized and accepted God’s call on their congregation to begin a ministry to the more than one thousand Spanish-speaking residents and nearly one thousand additional Spanish-speaking migrant workers in the area. One year later, as the ministry is about to begin its busy season, Pleasant Valley Church of God is celebrating what the Lord has accomplished through his people.

Pastor Al Perry and wife had ministered at the Pleasant Valley congregation back in the 1970s and 1980s, but later moved to Alberta. He explains, “There was a lady and her husband who moved to Vernon that had known my wife’s grandmother—they were from Mexico, and my wife’s grandmother had taught them English.” The Perrys moved to Alberta for a time, and the couple from Mexico relocated south of Vernon. When the Perrys returned to pastor the congregation once again, the couple became reacquainted with the Perrys; they soon accepted Christ as Savior. Discussion followed about starting a Spanish outreach through the church, and in early April, the 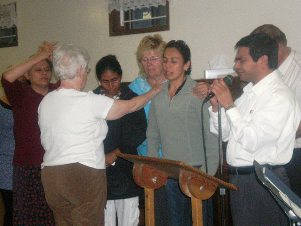 From apples to grapes, fruit is a major industry in Vernon. Spanish-speaking migrant workers, in cooperation with the Canadian government, provide much-needed labor during the busy season. Perry explains that the employers value these laborers for their hard-work ethic and trustworthiness. They often work twelve-hour days and simply have no time to cook their own meals. The church began offering free meals to these workers on Sunday evenings. In addition, leftover food was boxed and given away to the workers and their families.

All year, the church offers at least one combined English and Spanish worship service each month, followed by potluck dinners. During the busy season, which starts in April, the church offers a unity service every Sunday evening. The singing and the preaching are offered both in English and Spanish. They have translated more than one hundred worship songs into Spanish to date.

“One thing that we have found is that there has been a real bond between the two cultures,” Perry explains. “We’re really not two congregations. There is real harmony among the people and a moving of the Spirit of God upon these services. The picture of the church really is the unity of the people.”

Since the new ministry was developed, thirty-four people have made commitments to Christ. In addition, many have rededicated their lives to the Lord and several have experienced divine healing. Pleasant Valley gathered one Sunday evening to pray for a man who, as a result of severe cataracts, could not see out of either eye. The next Sunday he came to church and reported complete vision restoration! Another lady suffering from extreme knee pain was anointed, prayed over, and completely healed. And one gentleman who battled a shoulder injury was dramatically healed in a prayer service, as well.

“They are a people that come from situations where they cannot afford to have the medical treatment they need,” Perry explains, “so they exercise a lot more faith, and we too were edified by what the Lord was doing week after week. The worship times have been so uplifting, with a wonderful spirit of praise and edification.”

Pastor Perry and the Pleasant Valley Church of God are expecting the blessings to continue to flow on their diverse yet united ministry. “It’s a matter of preaching the word, praying, and trusting the Holy Spirit to lead,” he concludes.