By chogministries
Posted July 29, 2014
In All Church of God
Camp Meetings Connect CHOG Congregations Across Country2014-07-292014-07-29https://www.jesusisthesubject.org/wp-content/uploads/2016/07/ChogLogo-Light.svgChurch of God Ministrieshttps://www.jesusisthesubject.org/wp-content/uploads/2016/07/ChogLogo-Light.svg200px200px 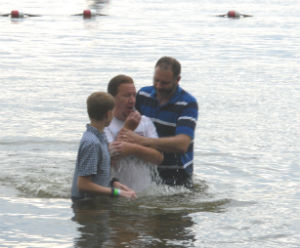 Where can Church of God people find relief from contemporary culture’s fast-paced daily grind? Believers often find they need a break from the hustle and bustle of everyday life, a respite from the pressing demands of ministry, and a setting far from the noise of convention halls in congested city centers. Many Church of God district, state, and regional camp meetings still convene every summer across the country, offering rest, solitude, and spiritual rejuvenation for ministers and laypeople alike.

Camp meeting at Yellow Creek Lake in northern Indiana began not unlike other camp meetings in North America—with a celebratory worship service. Tamara Shelton, of Anderson University, spoke messages of hope centered on the camp-wide theme of “Be Strong,” drawn from Ephesians 6:10. Doug Irving, of Pennway Church of God in Lansing, Michigan, served as worship leader. Joined by a worship band, he led the gathered saints in a smorgasbord of modern tunes, classic hymns, and the gamut of styles in between. Jesus was 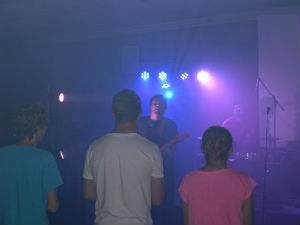 the subject through it all, and his name was uplifted in everything that was said and done.

Under tall shade trees gently swaying in the lake-cooled breeze, children flung water balloons across a volleyball net, made a variety of crafts, and roasted marshmallows. Archery, a zip line, and a floating trampoline on the lake attracted several thrill-seeking youth, while adults were challenged through a variety of conferences on subjects ranging from missions to cultural issues.

It’s no secret that Church of God people love to eat. Mealtimes at Yellow Creek Lake were opportunities not only to satisfy camp cravings but to get reacquainted with old friends and build new relationships. While the snack bar’s ice cream-brownie combination with chocolate topping did taste very good, it was nothing compared to the palpable taste of the Lord’s presence in each evening service. The Holy Spirit prompted several unplanned moments of power and conviction, including unscheduled songs, times of prayer for specific needs, and testimony.

As the congregation worshiped the Lord in unity (and four-part harmony), reminders of decades past flooded the hearts of many. While it’s unlikely that none could recall the days when D. S. Warner walked those hallowed grounds, the memories of these campers took on a much more personal note. Some were emotionally overcome by recollections of commitments to Christ, calls to ministry, and the development of lifelong friendships at camp meeting. Everyone rejoiced at the work of the Lord in the present day—saving souls and making disciples through a summer of children’s and youth camps that culminated in the annual camp meeting. After celebrating four commitments to Christ through the ordinance of baptism, the Lord proved once again the importance of these gatherings. Four curious onlookers from outside the camp meeting were invited to watch the baptism service at the lake. After pausing for a pop-up thunderstorm to exit the area, these kids sat down for a chat with one of the pastors. By 7:00 that evening, three of the four publicly expressed commitment to Christ through baptism!

If your camp meeting has already come and gone this year, how did you see God’s hand at work there? Let us know by sending an e-mail to commservices@chog.org and we may share your experience with others in the Church of God. For a partial list (information submitted to Church of God Ministries) of camp meetings across the country, visit www.jesusisthesubject.org/regional-state. Thank you!