By chogministries
Posted November 18, 2014
In All Church of God
California Church’s Creative Way to Fight Trafficking2014-11-182014-11-18https://www.jesusisthesubject.org/wp-content/uploads/2016/07/ChogLogo-Light.svgChurch of God Ministrieshttps://www.jesusisthesubject.org/wp-content/uploads/2016/07/ChogLogo-Light.svg200px200px 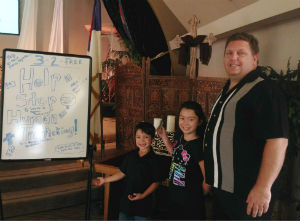 One thousand dollars may seem like a lot of money to a small congregation. It’s often a lack of resources that deters many Church of God congregations from financially supporting movement-wide efforts. One such effort is the $1,000 X 1,000 campaign to fight sex trafficking, which was launched at Church of God Convention 2014. But $1,000 becomes manageable when it’s broken up into bite-sized chunks, one Long Beach, California, congregation has observed. Their “$3-2-free” challenge, which is currently resonating among the people of the modest-size church, might be one simple way your church can help change the world.

Personally convicted by the church’s need to do something about sex trafficking, Pastor Kermit Wilson, of College Park Church of God, spent some considerable time thinking about the problem, praying about what to do, and researching the issue at the local level. “We discovered the Los Angeles port for sex trafficking is right here in Long Beach and that this is the West Coast hub of sex trafficking. We saw that the FBI has prosecuted eight hundred cases in the past year alone.”

A local bus stop advertising campaign has saturated the area with messages about sex trafficking awareness, bringing the issue to the forefront of College Park’s community. The more Kermit prayed and researched, the more he realized that God’s timing was perfect for rallying the congregation around a new effort to fight such evil. In a sermon illustrating the problem of sex trafficking, Kermit Wilson used videos and explained how the Church of God has gotten involved. Following the message, one man (Gordon Thompson) approached Kermit with a little bit of encouraging math. For just three dollars each week from each congregant, it would take just a matter of weeks for them to come up with the $1,000 to contribute to CHOG TraffickLight. “$3-2-free” was born, and the congregation was on board.

Now a glass jar sits on the church’s Communion table as an ever-present reminder of the church’s simple fundraising campaign. But that’s not all. The church has also partnered with the county to fill backpacks of blessing for victims who have been rescued from the sex trade. “So we’re trying to connect locally as well as globally,” Kermit explains. “What we’re doing here is meaningful in our context for the sake of the broader kingdom of God.”

The church’s spotlight on sex trafficking is not a departure from their longstanding vision and mission. In fact, this effort is simply one expression of it. “It really is a part of a larger picture for us of raising up disciples, who are commissioned to go into all the world to make a difference for Christ. This is just another practical experiences for people to grow and develop in their faith.”

College Park’s fundraising campaign will continue through mid-February and offer the congregation a chance to raise funds above and beyond the goal. Though human trafficking has not been on the radar for many in the Church of God in recent years, the latest efforts of CHOG TraffickLight have opened countless eyes to the travesty of trafficking.

“It’s horrible. It’s abusive,” Kermit reflects. “But it’s something we can do. Of course the money is a drop in the bucket, but if we can save just one twelve-year-old, it will be worth it all.”

Learn more about $1,000 X 1,000 and how your church can get involved in the fight against sex trafficking at www.CHOGTraffickLight.org. Freedom Sunday is February 22, 2015.