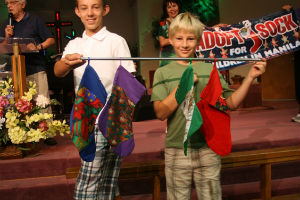 Anyone entering Antelope Road Christian Fellowship in Citrus Heights, California, is immediately aware of the array of international flags surrounding the sanctuary. But these are not just decorative banners; they represent countries where someone in the congregation has witnessed. The church has had a longstanding missions emphasis, both near home and abroad, and their most recent project is called “Adopt a Sock” for the Philippines.

Two couples in the church recently visited Manila because of family ties there. Wes and Nancy Keyson were visiting her son, and Mike Botica and Gloria Johnson were visiting her family. Both couples went to the Manuguit church, pastored by Eddie and Fely Viray, and were welcomed as brothers and sisters in Christ. The couples saw that the children of this particular area of Manila have many needs. As Mike and Gloria showed pictures of the area served by this Church of God, the Antelope Road church responded. The church had already helped with monetary gifts. Earlier they had also helped by sending boxes of school supplies and clothing to another area of the Philippines, spearheaded by the Harvey family, who also have ties to the country. Now the congregants were presented with a new plan to help. 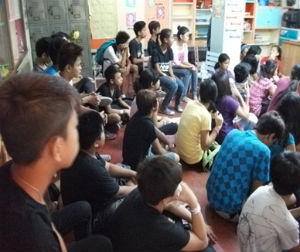 Warren Popp, former missions director for the church, laid out a vision to the congregation of sending nearly one hundred filled Christmas stockings to our sister church in Manila. Jackie Wilson, an expert seamstress, created the stockings from colorful Christmas material. When the need was presented in August, the stockings were made available after the service. All stockings were adopted by the end of the morning. Since they will be sent by ship, there was a need to have them returned by the end of September for shipment.

Dennis Carroll, counseling pastor, had an idea to help the upper elementary children participate in filling the stockings. He arranged to have this Sunday school class go to the local Dollar Tree to pick items for the socks. The class took their assignment seriously, getting candy, school supplies, toys, puzzles, toothbrushes, and other items that they felt would be appropriate for a child to receive. Then each child put a note inside to the recipient.

Pastor Rhodes Pringle is happy to see the impact this project is having on the people of Antelope Road Christian Fellowship as so many, both young and old, are involved in missions outreach.

How is your congregation involved in missions? Explore the possibilities at www.chogmissions.org.