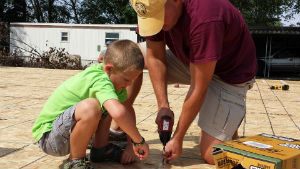 They raise the funds themselves. Then they go out and build a house. They give the home to a needy family, debt-free. Then they do it again. Their work touches the lives of families in Guatemala, Mexico, and soon in the Dominican Republic and the United States. The first time Thursday Church of Vincennes, Indiana, built one of these homes, the new homeowners weren’t the only ones blessed. Since that day, Thursday Church has never been the same. 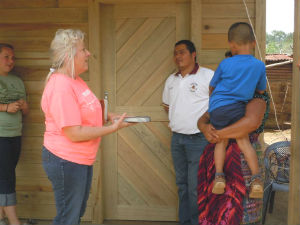 Like so many projects that make a difference, money is required. Thursday Church began building homes five years ago when they first heard about Casas por Cristo, translated Houses for Christ. The initial response was, “There was no way we could afford this.” But they trusted God to make a mission trip possible for them. Not only did the necessary funds come in, but also their group built that first home in just four days. “The home was given debt-free, and a pastor in the area was assigned to follow up with the family who received the home, and to invite them to church. Every home we build is followed-through in this way,” Debbie Salters, lead pastor of Thursday Church, explains.

In total, Thursday Church—a Church of God congregation that strategically holds its primary worship services on Thursday evenings—has built nine homes in Mexico and Guatemala. Plans are underway for construction in the Dominican Republic for March 2016. In the meantime, they’re now building their first home in Vincennes’ rural neighbor, Bicknell. Once again, the home will be built for a needy family, this one unchurched. “They were asked to trust us enough to let us tear down their home that was falling in around them so we could use the property the homeowners already owned,” Debbie explains. “We are looking forward to a transformation story with them.” 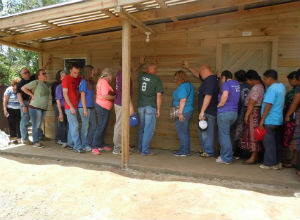 Multiple stories of transformation have already been written because of the church’s international engagement. The prologues are in the works for several more, as Thursday Church was recently awarded a grant to take ownership of twelve dilapidated houses in Vincennes, each considered a blight to the community. These homes sit empty without anyone paying property tax, so construction of these new homes will benefit the community, as well as the new homeowners.

Thursday Church’s missional engagement goes far beyond bricks and mortar. Recently a group from the church traveled to Honduras to speak hope into the lives of girls who had suffered prostitution and other forms of sexual abuse. “I was overwhelmed by one thing,” Debbie recalls. “They were girls—little girls—aged eight to sixteen. Innocent, sweet, kind-hearted girls who, because of their life situations, were sold by their families. Their stories were overwhelming. The work being done their by the Church of God sister church in Choloma and Compelled by Christ is fabulous! They currently have twenty-seven children in five homes where the girls are safe, fed, churched, and loved. They are free from sexual abuse!”

With every swing of a hammer, Thursday Church sees beyond themselves. “We serve the poor in our community, but poverty here isn’t the same as poverty in a foreign country,” Debbie explains. “It helps us open our minds and hearts to others. God’s backyard is big, and he’s not just about blessing the United States. We want to go into the world locally and globally and share God’s love wherever we can.”