By chogministries
Posted February 13, 2015
In All Church of God
Boston Congregation Weathers the Storm2015-02-132015-02-13https://www.jesusisthesubject.org/wp-content/uploads/2016/07/ChogLogo-Light.svgChurch of God Ministrieshttps://www.jesusisthesubject.org/wp-content/uploads/2016/07/ChogLogo-Light.svg200px200px 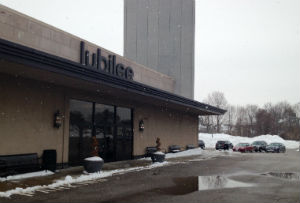 Photo: Jubilee Christian Church. More snow is in the forecast for Boston, Massachusetts.

Nearly eighty inches of snow has fallen on Boston, Massachusetts, since the winter storm season began. Though Bostonians are certainly used to dealing with major snowfalls, even the most winter-hardy residents are caught off guard when so much falls in a short period of time. Nearly five feet has fallen in one month, shattering records dating back to 1891. While the white stuff may have caused a few headaches and snarled traffic along Route 28, it has been unable to stop ministry at Jubilee Christian Church.

The large Church of God congregation in Boston is known for its dynamic preaching and worship. When harsh winter weather threatened to shut down the church’s Sunday operations, Jubilee remained open as a haven of worship and warmth. Snow has only warranted weather closures at Jubilee on a couple of weekdays. Even during these days off, the ministry of Jubilee doesn’t go dark. “Thanks to social media and multimedia, we’re able to stay connected, make phone calls, answer questions, and stay in contact with people,” Executive Pastor Chris Sumner explains. “Our numbers have been down at our Sunday morning services—about 20 percent down. We’ve said that if you have questions about your safety—whether driving or walking—stay home. But we haven’t actually had to cancel any worship services.” Due to heavy snow in the forecast this weekend, services normally held on Sunday won’t be canceled, but will be moved up to Saturday.

The latest arctic chill to spill into the Northeast has done little to diminish the spirit of excitement at Jubilee Christian Church. Jubilee’s founder and bishop, Gideon Thompson, recently passed the baton of leadership on to his son Matthew K. Thompson. At CHOG Convention 2014, many Church of God people were first introduced to the Thompson family when recording artists Ashmont Hill led worship. At this year’s convention (June 22–25 in Oklahoma City), Gideon’s son Andy will speak. Unaffected by the winter blast, Andy joyfully preaches the Word in beautiful North Carolina.

But snow can be beautiful, too. Just don’t tell that to the guy who’s shoveling his drive for the umpteenth time this month. Chris explains that the biggest challenge for the city is removing the snow. In classic Boston fashion, the city’s now considering dumping excess snow into the harbor. “We’re pretty good with it all,” Chris explains. “This is New England, so we’re pretty used to snow—just not at this pace, or all at one time. Normally we would get all this, but spread out over time. People here are always in a hurry for spring to come!”