By chogministries
Posted May 10, 2019
In All Church of God, Global Strategy
Bolivia: A New Joel2019-05-102019-05-10https://www.jesusisthesubject.org/wp-content/uploads/2016/07/ChogLogo-Light.svgChurch of God Ministrieshttps://www.jesusisthesubject.org/wp-content/uploads/2016/07/ChogLogo-Light.svg200px200px 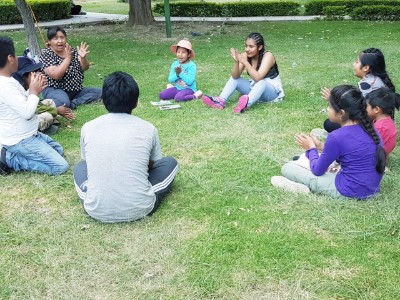 By Paul and Kattia Jones

Once upon a time, in a small Church of God in Bolivia, South America, there was a four-year-old boy named Joel. He was restless. He participated in very little during Sunday school, and he did not pay much attention to his teacher Irene, either. In addition, he showed his fist to any child who kept looking at him. This type of behavior drew the attention of missionary Kattia Jones, who decided to speak with the teacher. The conversation led to another topic that the missionary suspected was the main reason why Joel behaved that way.

“Why does Joel behave like this during class? Is he the youngest in the family, the spoiled one?” the missionary asked.

“No, on the contrary, he is the oldest one. His mother recently had another child,” Irene replied. And how’s your Sunday School class? Do you have any material to work with children? continued the missionary.

“Well, I have some crayons and colored pencils that are broken and worn out, a few sheets of paper for them to draw on, and an old, worn-out puzzle. But I do have a Bible that I use to teach them. This is how they learn and sing some songs. The only thing is that the children get tired and bored.”

“Irene, I really want to help you with some material for your class, but I will not do it all for you. You will have to do it at my house. Together, with the help of God, we will see your class transformed and these children changed for Christ,” said the missionary. 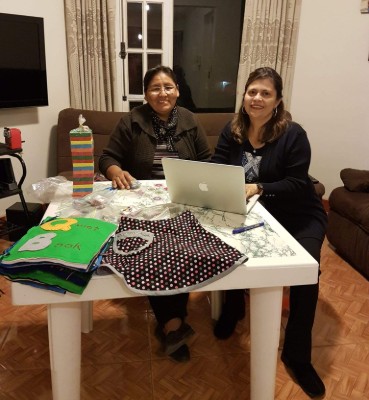 Every Wednesday, from 7:00 to 10:00 PM, Irene and Kattia worked tirelessly, preparing material that they printed out, cut, laminated, and organized. The next day, Irene had to be ready for her regular job at the Montessori school where she teaches. She always prayed for the children at church and for those in her neighborhood. It was like a dream come true now, because she had been asking God for a long time to provide some help for Sunday school.

The days passed, and the missionary visited the church again to see how things were going.

She looked to see if there were any changes in the class, to observe the children and see how they were using the new material. She observed everything and noticed all the children were happy and enjoying the class—the teaching and, of course, the games. “Hmm, how strange,” thought the missionary. She took a quick glance to make sure of one thing. She looked again and again and, with restlessness in her heart, looked again to the children playing and having fun. Something was not as she expected, but she was afraid to ask Irene. “I do not see Joel,” she thought. “It cannot be possible that he is not here,” she said to herself. And many thoughts went through her mind. “Maybe his parents are not attending church anymore, or Joel did not behave well, and they had to take him out of the class, or he might be sick. Or I just do not recognize him.” 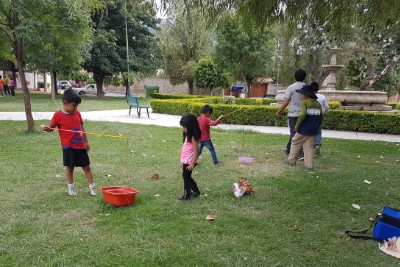 Kattia asked Irene. She answered, “There is no longer the Joel you knew. There is another Joel now.” With amazement, the missionary replied, “Do you mean that Joel, the kid who was disruptive in class, who will leave the class to go sit with his mom, is no longer here?” With a big smile on her face and glowing with joy, Irene answered, “Dear Kattia, Joel is here, but you do not recognize him because he is a new child. Your plan and my prayers have changed Joel’s life. He does not behave badly anymore, he loves Jesus, he no longer leaves the class, but rather actively participates in it and memorizes the Bible, too. Besides that, he loves to sing, and he has favorite songs. And, if that were not enough, he waits patiently for the last twenty minutes of the class to enjoy each game. Of course, since Joel loves to fish, you can imagine what his favorite game is!”

The missionary did not know how to react to such a story. Her heart pounded with joy, with gratitude to God. When she talked with Joel’s parents that same day, she showed them a video of Joel playing, fishing, to which the father asked, “Who is that child?” The missionary replied, “It’s Joel, your son.” The father was so happy that he asked her to send him all the videos and photos of his son. He also added, “My wife and I were wondering every Sunday why Joel did not come up and sit with us and what has made this change.” He thanked us with all his heart for the help given to his son.

Now the twelve children in the class, along with Joel, are looking for strategies to evangelize. Their motto is, “Fishers of men.” Every Saturday, they go to a park to hand out Bible tracts and invite children to play Bible games. After that, Irene shares a Bible lesson that the parents of the children of the park get to hear, too. Very excited, these parents asked the kids to come back every Saturday. The children of the Church of God are very happy for their new experiences in Sunday school, and they are thankful to have Irene as their teacher.

Learn more about the ministry of Paul and Kattia Jones, missionaries for Global Strategy to Bolivia, and discover opportunities for support, at https://www.chogglobal.org/team/pkjones/.