By chogministries
Posted March 3, 2014
In All Church of God, Be Bold
Boldly Preaching Jesus at Age 100: Linvel Arington2014-03-032014-03-03https://www.jesusisthesubject.org/wp-content/uploads/2016/07/ChogLogo-Light.svgChurch of God Ministrieshttps://www.jesusisthesubject.org/wp-content/uploads/2016/07/ChogLogo-Light.svg200px200px 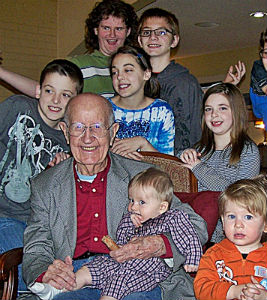 Retired Church of God pastor Linvel Arington turned one hundred years old on November 24, 2013. Instead of the typical birthday celebration, Linvel spent the morning preaching from the pulpit of Oaklawn Church of God in Hot Springs, Arkansas. What started out as a tongue-in-check joke about preaching his “next-to-last sermon” on his one hundredth birthday turned into a momentous reality.

Pastor Arington recently stated, “I gave my first sermon when I was only nineteen, although it took me nearly fifty years to figure out just exactly what God intended me to do all along.” He was referring to a ministry he began, based on one of the many songs he has written, called “Giving Heaven Away.” This ministry serves the community, through Oaklawn Church of God, by providing for a range of needs depending on the circumstances.

This ministry is having a ripple effect in the community. Most in the church know Pastor Linvel as Grandpa Quarter, as he is well known for giving quarters away to young children (and youth, and even young adults) wherever he goes. He feels blessed to see the effect of “Giving Heaven Away” by many of the young people who take the quarters they receive from him and pass them on to someone else or place them in the church offering. He said, “When kids get interested in others, it does something to adults. When you have something good going, people start to notice.”

Over the course of his one hundred plus years, Pastor Arington has written more than two thousand songs, poems, and short stories. When he was well into his nineties, he wrote and published his first book, Waves of Flag City. The purpose of the book is to influence churches and pastors to do the ministry the way Jesus Christ did—by walking the streets, looking for the needy.

On giving over the pulpit in honor of Linvel Arington’s one hundredth birthday, Steve Nelson, Oaklawn Church of God lead pastor, said, “It is a privilege to sit under Grandpa Quarter’s teaching. At one hundred, he’s earned the opportunity to take the microphone and speak whatever is on his heart. He could have told stories or sang some of his songs, but he chose to simply present the gospel. He preached Jesus, and it was awesome!”

Watch the video of Linvel Arington’s one hundredth birthday sermon on the Oaklawn Church of God YouTube channel at http://www.youtube.com/watch?v=ypGBCpi8VCo.

For more inspiration to be bold in your faith, attend the Church of God Convention 2014, June 23–26 in Oklahoma City, Oklahoma. For details about the convention and General Assembly, and to register, visit www.chogconvention.org/default.