Biblical Reconciliation: A Topic for the Global Forum 2013

By chogministries
Posted June 24, 2013
In All Church of God, Global Gathering, Global Strategy
Biblical Reconciliation: A Topic for the Global Forum 20132013-06-242013-06-24https://www.jesusisthesubject.org/wp-content/uploads/2016/07/ChogLogo-Light.svgChurch of God Ministrieshttps://www.jesusisthesubject.org/wp-content/uploads/2016/07/ChogLogo-Light.svg200px200px 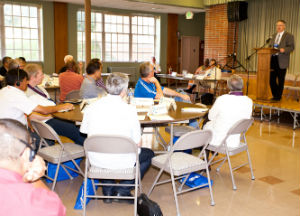 The Church of God anchors its theology on the twofold emphasis of holiness and unity. Holiness is understood in relational terms, that is, the ability to love more perfectly, which if practiced in daily life leads to unity. Reconciliation is the process that moves us from holiness to unity. The apostle Paul reserved this word reconciliation as his most powerful way of expressing the meaning of the life, death, resurrection, and abiding presence of Jesus Christ. The process of reconciliation begins when we accept God’s invitation to make things right. Sin caused our relationship with God to become fractured. The death of Jesus was understood as the action that forgave sin and repaired our relationship with God. Reconciliation comes to us from God as a divine gift. The effect is that “everything old has passed away; see, everything has become new!” (2 Cor 5:17 NRSV). We are redeemed and forgiven.

The home of Violette Nyirarukundo and her family was near the center of the capitol city of Rwanda. When the plane carrying Rwanda’s president was downed in 1994, it was just a matter of time before soldiers would be at her door. She told her family to hide beneath their beds. As bullets were breaking the windows of the house, Violette peaked out of the window closest to her and saw the face of a soldier with his gun pointing directly at her. She cried out that she would open the door and let him in. Violette and her family were physically abused. Violette’s daughter said to the soldiers, “We are Christians. May we pray before you kill us?” Violette grabbed a Bible and told the soldiers that this was the only weapon in the house. These acts disturbed the soldiers. So the military men decided to leave saying, “We do not want the blood of Christians on our hands. Others will come after us and kill you.” Several other soldiers did come. They saw that the windows were broken and assumed that the inhabitants had already been killed.

As Violette recounted this incident, she added that she and her family were disappointed when the soldiers did not kill them. They had made their peace and were ready to go to heaven. Violette unconditionally forgave these soldiers after they traumatized her and her family because she had experienced reconciliation with the one who, while hanging on the cross, said, “Father, forgive them; for they do not know what they are doing” (Luke 23:34 NRSV).

In the Sermon on the Mount Jesus says, “So when you are offering your gift at the altar, if you remember that your brother or sister has something against you, leave your gift there before the altar and go; first be reconciled to your brother or sister, and then come and offer your gift” (Matt 5:23–24 NRSV). Jesus reminds us that our reconciliation with God should produce the desire in us for reconciled relationships with those in our community of faith, which includes our families and our spouses. Church splits and congregational infighting create legitimate questions regarding our holiness and our unity. The phrase from the early days of the Church of God, “a united church for a divided world,” requires that our congregations exhibit a spirit of unity.

Reconciled relationships with God, our families, and local churches produce the desire to be at peace with our sisters and brothers in the human family. Central to the ministry of reconciliation is social justice. We must address the divisions and oppressive realities in the world. We should be at the forefront of dismantling institutional forms of racism, sexism, classism, and other ways that injustice reveals itself. Biblical reconciliation creates just relationships!

This is an excerpt from “Biblical Reconciliation: Reflections on the Doctrine and Practice,” by Curtiss DeYoung. DeYoung’s paper on reconciliation was used as the basis for the Global Forum 2013.