Beyond the Border: A Visit with the Church of God in Northern Mexico 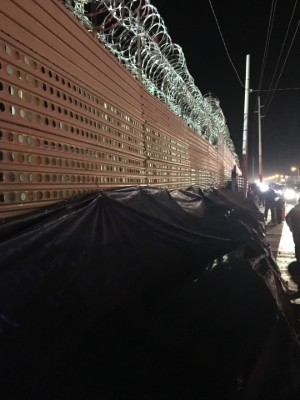 Mexico side of US-Mexico border fence; makeshift tents of asylum-seekers at base.

After borrowing a Spanish New Testament and grammar book to learn Spanish, B. F. Elliot set sail from San Diego for Ensenada, Mexico, with the stamp of approval and exactly two dollars from D. S. Warner himself. B. F. Elliot would be the first missionary of the Church of God, heeding the Spirit’s prompts to preach the gospel to Spanish-speaking people in 1891. Combined with subsequent trips, and enhanced by others who would come alongside and come after, B. F. Elliot got to work, conducting door-to-door evangelism and starting a mission. Seeds planted then would ultimately grow into the active, unified Church of God in northern Mexico it is today. Earlier this year, Global Strategy’s Andrew Gale joined Darren Adwalpalker of Highland Park Community Church (Casper, Wyoming), as well as two leaders from their missions committee, for an eye-opening visit to Baja California. While the media often only portrays a narrow view of Mexico, limited to immigration and border concerns, this visit shone a light on what God is accomplishing through these thirteen congregations, at the border, and beyond the border.

The real story at the border and beyond is the unity and love of the Church of God pastors—love expressed to each other, the oppressed, the victimized, and the lost. It can be easy to assume ministry in the Church of God in another country is just like ministry in the United States, especially if it’s in a country with such proximity. While the message is the same, the Church of God in Mexico is spread out much more than most parts of the US. Indeed, some areas of the US have Church of God locations few and far between. But this is the dominant situation in northern Mexico. Ministry can seem like it’s taking place in a vacuum, and it’s difficult to get from church to church, as many are three hours or more away from each other. But distance, hardship, and minimal resources do not stop these pastors from connecting. That’s the humbling part. 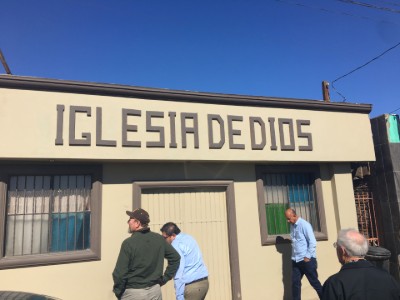 One of the Church of God buildings in northern Mexico.

Andrew Gale, executive director for Global Strategy, observes, “Though they are spread out in Baja, they work with one another. For example, there was a church in Mexicali that had some damage done to it and the pastor had left the church unattended. People had begun squatting in it, and unlike the United States, other countries around the world have laws that seem, from our perspective, to favor squatters. In many countries, the squatter has as much or more rights than the person who owns the building. The Church of God was about to lose their building in Mexicali, but they really want the work there to be revived. So one night, all the pastors went to Mexicali and eight of them actually spent the night on the property—even with no roof on the building! Then the pastors took turns, each one, once a week, traveling to stay at the empty church, to keep it in Church of God hands. That’s dedication, and they did that for months.”

Andrew points out that these pastors have their own churches to shepherd. The church in Mexicali isn’t their home church, yet they banded together for a cause greater than their own. Even more inspiring, Andrew reports that each of the churches now collects a tithe to support a hired worker to live on the property, and also fund the future rehabilitation and restart of the Church of God in Mexicali. 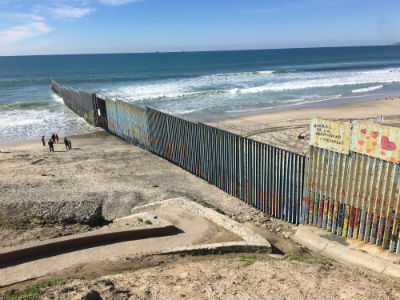 The situation at the border is continually in flux. At a moment’s notice, government decisions can change the scene. But what’s not in flux is what the Church of God in northern Mexico, in particular the congregation at San Luis Rio Colorado, is doing to demonstrate the love of Jesus. Though the church is only averages about thirty strong, Andrew learned that they regularly take a fifteen-passenger van to the border and minister to the crowds of people waiting in line to apply for asylum from rampant violence and poverty. With their van, they take up to forty people, in shifts, back to their church to give them a chance to use the facilities, take a shower, and wash their clothes. They’re also given the chance to cook their own meal. Andrew explains that last one: “Some may wonder why they don’t just serve them prepared meals. If you can imagine being at the border where, all day, every day, people just hand you things…and when you consider that, especially in a lot of cultures, the world revolves around the kitchen, it can be very meaningful to simply do the cooking yourself.”

Andrew reports that there aren’t any public restrooms at the border. There are restaurants nearby, but they charge twenty-five cents per use. Simply bringing a family with children to the church, even to have a bathroom break, is a powerful expression of God’s love.

Darren Adwalpalker, the go pastor for mobilization and missions at Highland Park, has developed a heart for these northern Mexico pastors for several years. At the border with Andrew and the team, he could be heard taking advantage of a moment, while eyes and ears were on him, to testify publicly to the hope and love of Jesus Christ. Darren was the initiator of this visit to Mexico, and he explains why: “I pastored a bilingual Spanish- and English-speaking Church of God congregation in Torrance, California, and had the privilege of getting to know the pastors and seeing their hearts for God and people. I am amazed how they work together to support one another spiritually and relationally. I consider them not only co-laborers in the Lord, but also true friends. We’ve been in each other’s homes and have shared life together. The relational nature of ministry in Mexico challenges my American task-orientation.” 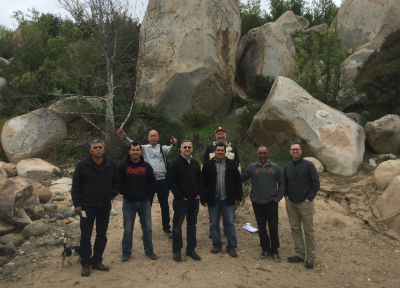 Numerous other great initiatives and ministry plans are underway in Baja and other regions of northern Mexico. Their camp—Camp Abarim—for instance, though having declined over the past several years, is looking to grow as they consider opportunities to minister beyond themselves and bring in additional streams of ministry funding. They’re also blessed to have received Andrew and Darren this year, as connection with the Church of God in the United States grows stronger.

The eyes of the world are constantly on the border between the United States and Mexico. The situation remains volatile. Though the temptation is to focus on the political, Andrew contends that the focus should be on the people. “Let’s pray for these churches as they serve those at the border,” Andrew concludes. “The lives of those people are very difficult, and we need churches willing to continue to care for them and walk alongside of them. Let’s pray that our churches would have the strength, endurance, and perseverance to care for the those at the border.”

Make your mark on what God is doing in Mexico! Consider a gift to further the ministry of Camp Abarim (Project #42.40260), and learn more about the vital work, at www.chogglobal.org/campabarim.