Beware Religion in Politics, or Politics in Religion? New Book from Warner Press

By chogministries
Posted November 6, 2014
In All Church of God
Beware Religion in Politics, or Politics in Religion? New Book from Warner Press2014-11-062014-11-06https://www.jesusisthesubject.org/wp-content/uploads/2016/07/ChogLogo-Light.svgChurch of God Ministrieshttps://www.jesusisthesubject.org/wp-content/uploads/2016/07/ChogLogo-Light.svg200px200px 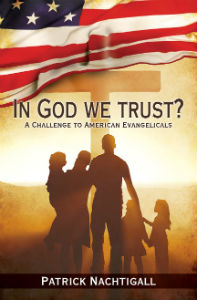 The 2014 mid-term elections continue to underscore the influence of religious beliefs upon public policy. Christians, Muslims, Jews, and even atheists demand to be heard in debates about terrorism, immigration, gun control, health insurance, and other hot button issues. But how does American political ideology influence its religious beliefs, especially in the evangelical Christian community? Patrick Nachtigall, a missiologist living in Berlin, believes American culture has shaped American evangelicalism so decisively that evangelicals are ill-prepared to face the economic and spiritual challenges ahead.

Global events suggest that we are entering such difficult times. Nachtigall believes American Christians must set aside the false gods of materialism and individualism or they will not survive. “Our primary citizenship is as the people of God, not as Americans,” he says. “What does that allegiance require of us in the years ahead?”

A native of Costa Rica, Nachtigall became a naturalized American citizen at the age of fourteen. He went on to receive his master’s degree from Yale University and write several books on mission trends in the global church. He calls himself a “kingdom-first evangelical.” He says, “I always ask myself whether my evangelical beliefs take into account God’s thousands of years of working through all cultures, or whether I am looking only through the prism of one culture: my own.”

Nachtigall makes the case for this globally conscious faith in a new book titled In God We Trust? (Warner Press, 2014). Now serving as regional director of missions for the Church of God in Europe and the Middle East, he was stationed previously in Hong Kong and traveled extensively in Asia, Africa, and Latin America. His earlier books include Passport of Faith (Warner Press: 2006) and Faith in the Future (Warner Press: 2008).

Warner Press is a not-for-profit organization that publishes and distributes Christian products, including ministry resources, church supplies, kids’ books and greeting cards that equip churches for ministry and encourage individual spiritual growth. For more than 130 years, Warner Press has been sharing the gospel of Jesus Christ and serving the Christian community worldwide. For more information, visit www.warnerpress.org.