Beauty from Ashes Amid Loss of Historic CHOG Building in India

By chogministries
Posted December 17, 2019
In All Church of God, Global Strategy
Beauty from Ashes Amid Loss of Historic CHOG Building in India2019-12-172019-12-17https://www.jesusisthesubject.org/wp-content/uploads/2016/07/ChogLogo-Light.svgChurch of God Ministrieshttps://www.jesusisthesubject.org/wp-content/uploads/2016/07/ChogLogo-Light.svg200px200px

In the early morning hours of November 17 in Shillong, India, a fire broke out in the historic Qualapatty Church of God. After having stood so prominently for more than a century, this beautiful, 117-year-old building became engulfed in the flames as a firetruck that was too big for the narrow road blocked the way for the smaller firetruck behind it.

For over a hundred years, the Qualapatty Church has been the spiritual center for people in the Church of God in Meghalaya and Assam. Today, the loss of this building touches the emotions of many, many thousands in this part of India. This is partly because it was built under the leadership of Rev. J. J. M. Nichols Roy, the much-revered pastor who founded the Church of God in this area. The other reason for the impact is that more than 3,000 believers today consider Qualapatty their church home, and more than 600 other churches throughout the two states of Meghalaya and Assam would attribute their existence to the church planting efforts of this parent church. 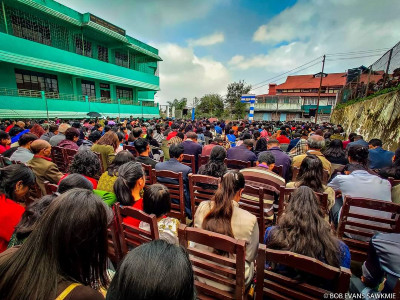 The congregation gathers the fire (photo used by permission).

The first Sunday morning after the Saturday night fire, Rev. Amos Moore did not have a building, but he did have a basketball court. Chairs were borrowed from several places and, on the basketball court, now turned open air church, the congregation grieved the loss of their building and the loss of two from their midst, who lived next to the church and were caught in the fire as it spread to their house. But in addition to the grief, there was also joy. They celebrated and gave thanks to God that their church is so much more than its building. It was a part of their heritage, but their hope is in the Lord Jesus, and nothing can take that away.

Currently the cause of the fire is still under investigation. The church leaders are waiting for government permission to rebuild and are still discussing plans for the new building. In the meantime, money is coming in from the Qualapatty people, local businesses, even from other denominations, and from other countries like the Brazil, Japan, and the United States. In a wonderful show of support, denominational leaders throughout India have been coming to Shillong to pay their respects to the leaders of the Church of God for the loss of this historic building, bringing financial gifts and words of encouragement. This story of loss is quickly becoming a story of beauty from ashes.

Don and Caroline Armstrong serve as regional coordinators for Global Strategy to the Asia-Pacific region. Learn more about the Church of God around the world at www.chogglobal.org.