Baseball, Baptisms, and a Bus

By chogministries
Posted August 18, 2015
In All Church of God, Great Lakes
Baseball, Baptisms, and a Bus2015-08-182020-02-29https://www.jesusisthesubject.org/wp-content/uploads/2016/07/ChogLogo-Light.svgChurch of God Ministrieshttps://www.jesusisthesubject.org/wp-content/uploads/2016/07/ChogLogo-Light.svg200px200px 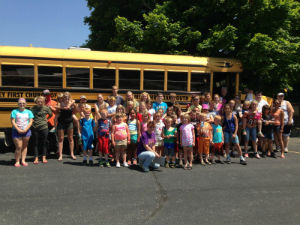 They come from all walks of life. Some have never stepped foot in a church. Most come from broken homes. Some have parents in jail, while some families have just fallen on hard times. Some are being raised by grandparents—even great grandparents. A number have parents who work on Sundays. They have one thing in common: most wouldn’t be able to come to church unless someone offered them a ride. Thankfully, Jessie Ritzline and First Church of God in Commiskey, Indiana, have stepped up to the plate.

“They told me, ‘Don’t retire from nursing. You’ll regret it. You’ll get bored.’ They didn’t know me very well,” Jessie recounts. Jessie has served on the local little league board for twenty-three years, and announces three games every Thursday night and six every Saturday afternoon from May through June. Today she drives a sixty-six passenger bus on Sunday mornings and Wednesday evenings, enabling some forty, fifty, and sometimes up to eighty students to get to church. 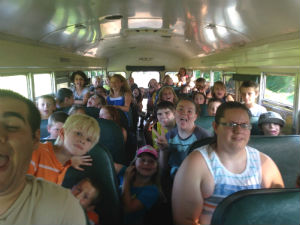 So how does someone go from nursing to hauling kids a hundred miles across the countryside two times a week? It goes way back to her childhood, her family, years of children’s ministry involvement, and the gracious God she serves. As the oldest of nine children, she was often charged with helping to raise her siblings. Ultimately she would end up having a total of six of her own. Devastating tragedies—including the untimely loss of a son and husband—left her heart empty and searching for divine meaning and purpose. But clinging to her faith, grounded in scriptures like Romans 8:28, she began to see just a portion of God’s beautiful unfolding plan.

It was the summer of 1999, two months before she lost her son in an accident, when God brought Jessie to a turning point. At Vacation Bible School, the Spirit prompted Jessie to appeal to the students for salvation. Several gave their hearts to Christ that evening, including Jessie’s son Matthew. Many were baptized the following week. Since then, Matt’s testimony has lived on through Jessie to bring more and more kids to Christ. Even in the face of excruciating loss, Jessie’s hope was strengthened as much as her heart for the souls of children. 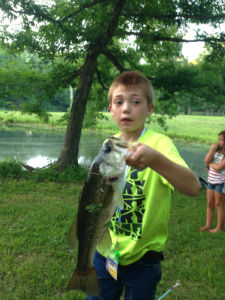 In 2011, the small church where Jessie was attending and serving as youth
director closed. She and the youth leader Tammy returned to Commiskey First Church of God where Jessie had attended for many years, and where she had raised her own children. They brought about a dozen of the youth group with them. Parents and adults stepped up to serve as teachers, cooks, and help with games, crafts, and singing. Tammy’s son Jacob, a licensed minister, served as youth leader.

One day when Jessie had gone to the grocery store, a student recognized her from little league. After asking what Jessie was up to, this student and his friends learned that she was on her way to church. Taking advantage of the opportunity, Jessie invited them to come with her. Though the boy from little league declined, one of his friends accepted the offer. His parents got in touch with Jessie, and then his neighbors also wanted to go to “youth group.” “It was a domino effect,” Jessie remembers. “I didn’t go knocking on doors. Little league was my ‘foot in the door.’ It just kind of snowballed from there.” The number of children gradually surpassed Sunday morning attendance. Last September, Jessie’s son Scott, and ministers Jacob, Dan, and George baptized seventeen of the kids. Praise the Lord! 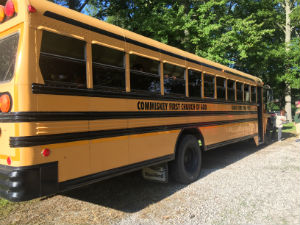 It wasn’t long before Jessie, Tammy, and the youth group started taking children to a camp they put on by themselves at Delaney Campground. The old sixteen-passenger van just wasn’t cutting it. Then, its engine stopped working altogether. Pastor Tim Poer of Grayford Road Church of God, a bus driver for their youth group and the area school system, helped get the children to camp that year. But he also knew of a bus for sale. Jessie’s brother and niece held a fundraiser in May 2014 and raised half of the needed funds to purchase that bus. At this point, Jessie realized they were serious. “A bus?” she remembers thinking. “You’ve got to be kidding. We can’t afford a bus…Oh, me of little faith!” But then Jessie’s daughter’s church, hearing of the need, took up a love offering which ended up receiving the exact remaining amount needed to purchase the bus. Since then, three or four times a year, an anonymous donor sends a check to help out with fuel. Other donors, including the church and several of Jessie’s family members, support the bus ministry by offsetting fuel costs. Now even the Sunday morning adult attendance at First Church is growing, to God be the glory!

To God be the glory. That’s Jessie’s heart. From youth group to camp, from singing for the elderly at the nursing home to singing for the Southeastern Indiana Camp Meeting of the Church of God, Jessie’s giving all the credit to the Lord. And the parents are taking notice. “They all love their kids and appreciate and support us for caring about them, too,” Jessie explains. “Many of the parents are coming now because they have kids who came on Wednesday night.”

“No, bored is definitely not in my vocabulary!” Jessie exclaims.