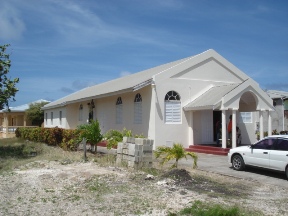 By Ruben Schwieger and Martin Goodridge

The Church of God on the island of Barbados is in the midst of a year of celebration. The Church has completed its first 100 years of ministry on the easternmost of the Caribbean islands. That’s the reason for the theme for the year: Hitherto–Whitherto. It is a celebration of what God has accomplished through faithful brothers and sisters over the years and of what the Lord is leading the Church toward in the coming years. They say, “Hitherto hath the Lord led us and we wait with anticipation to learn Whitherto he will lead us.”

Hitherto. The story of the first 100 years includes very humble beginnings of the Church as it began under the spreading Tamarind tree in Warleigh Pasture near the village of Mile-and-a-Quarter. There Brother Philip Scantlebury, a Bajan who came home from the United States to visit his mother, called a small group together to worship. Over the next 60 years 31 missionaries from the United States served the Church in Barbados in many different capacities and ministries. The church continued to grow and soon formed its own General Assembly. From those meager beginnings near the center of the island, the Church of God has spread all across the island with 18 congregations and over 2000 members and significant influence in all aspects of Bajan society and government.

The reach of the Barbados church has extended beyond the island. Martin Goodridge, along with his wife, Pearl, pastored the Church of God in London, England at one time. Victor Babb, was appointed by the Missionary Board as the Regional Director for the Caribbean Region. The women of Barbados who were a part of the Woman’s Missionary Society in the late 1960’s sent monies that helped to build the guest house at the Shelter in Cuttack, India. The Barbados church established and provides continued support to the Church of God on the island of St. Vincent. Congregations are presently supporting Kimberly Maynard, a missionary to West Africa.

Whitherto? During this centennial year the Church is giving significant attention to following the Lord’s leading into the future. Several years ago, the Church of God began a ‘youth camping’ program when other church groups were saying that it would never work. The program was an unqualified success, and the Church is venturing on faith into plans for developing its own camp and grounds.

Another exciting forward looking and inspiring challenge for the Church is to complete the project at Silver Sands on the south end of the island. The walls are up and the structure is nearly ready for the roof on the building which will house a school, a sanctuary which will seat 300 and offices for the General Assembly. Further development of the project will include a senior citizens facility and conference center. Along with these building projects, there are five and ten-year plans which call for a scheduled planting of ten churches and doubling of the number of Church of God believers and more immediate plans for a major youth and missions convention July 29-August 12.

Let us pray with, and watch the Lord work in, Barbados. Let us anticipate together seeing a strong movement of many being won to Christ as the Church moves out in faith and love.

Rev. Martin Goodridge is chairman of the Barbados General Assembly. Ruben Schwieger is a Global Missions volunteer. He and his wife Virginia are  former missionaries to Africa, China, and the Caribbean.