By chogministries
Posted September 3, 2013
In Global Strategy
Baptisms in Bulgaria2013-09-032013-09-03https://www.jesusisthesubject.org/wp-content/uploads/2016/07/ChogLogo-Light.svgChurch of God Ministrieshttps://www.jesusisthesubject.org/wp-content/uploads/2016/07/ChogLogo-Light.svg200px200px 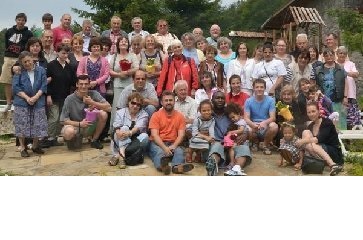 Sixty folks gathered from three congregations to praise the Lord and to encourage the eight individuals who had chosen to be baptized. They ranged in age from seventeen to seventy-one. One had made the decision to follow Jesus just a few months ago. More than a year had passed since two others had made commitments to be disciples of Christ. But several of the group had been unwilling to make this public profession for almost twenty years.

Imagine the persistence of Richard and Meta Baumgartner, who began ministering in Bulgaria in the early 1990s. Three of those baptized on August 11, 2013, had made their first steps in faith almost two decades ago under the leadership of the Baumgartners. They had come from Germany to strengthen the existing Bulgarian Church of God, to evangelize unbelievers, and to disciple new converts. They lived and ministered in Bulgaria for seven years. Since their return to Germany, they have continued to visit twice a year to maintain relationships and to teach, support and challenge the church.

Despite the ongoing efforts of the Baumgartners and eight years of work by missionaries Dave and Kathy Simpson, a number of active church members had still neglected to follow the command from Acts 2:38 “… Repent, and be baptized, every one of you…” (NIV). Some faced opposition from family members. Others, misled by poor theology, feared they just weren’t good enough yet. With great joy, the Bulgarian church witnessed these eight brothers and sisters declare their faith through baptism. It was a marvelous celebration. Perhaps no one was as delighted as Richard and Meta, the very personification of Psalm 126:5–6. “Those who sow with tears will reap with songs of joy. Those who go out weeping, carrying seed to sow, will return with songs of joy, carrying sheaves with them” (NIV).