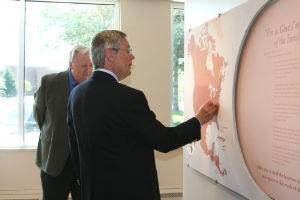 “Objects speak to us in a multitude of ways, and one of those ways is in story,” Brad McKinney shares — and he should know. As assistant professor of art at Anderson University, he teaches a class — Making Meaning and the Design of Everyday Things — devoted to the subject of objects and their role in our lives.

This past spring, McKinney saw the completion of his work for the Church of God Interpretive Center, which opened its doors to the public in June. McKinney was responsible for the architectural design of the space, as well as the design of the exhibition itself. He worked under the leadership of Dr. Merle Strege, Church of God Historian and professor of historical theology, and with Dr. Don Boggs, professor of communication arts and general manager of Covenant Productions®.

The Interpretive Center invites visitors to learn about the “life and spirit” of the Church of God as they walk through the space, which is full of objects symbolic to the Church of God’s history and culture. Yet the center asserts that it is neither a museum nor a memorial; the point is not to come and look at artifacts.

It’s about sharing a story.

McKinney explains, “We’re not coming to look at a dead thing. We’re coming to hear where [the Church of God] has been and think about where it’s going.”

Understanding the goals of his clients is a critical first step to McKinney’s work. “When I work with a client, my job is to understand what they are communicating enough that I’m communicating it myself.” For the Interpretive Center, this meant focusing on the idea of movement.

The Interpretive Center is divided up into six themes, which are designated by varying colors — one color for each theme. The six themes build progressivel 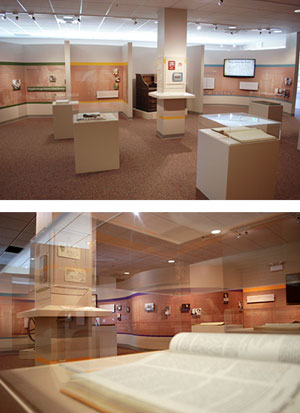 y as visitors move throughout the space. As McKinney considered how to facilitate traffic flow through the various exhibits, he was inspired by the work of Shigeru Ban, a Japanese architect who has created rounded, undulating walls in several of his structures.

McKinney designed the partition walls in the Interpretive Center to have a similar curved, waving flow. He explains “Part of the reason that the walls undulate is not just to make the space visually interesting, but also to suggest the unfolding of time … the banners are meant to be somewhat timelike or timeline-like, even though they don’t represent a literal timeline.”

He continues, “Rather than being just partitions on which things are hung, [the walls] are expressive of the movement — the Church of God is a movement, and the form of the walls attempt to express that.”

The Role of Objects

The main force for the content included in the Interpretive Center was driven by the story that Dr. Strege developed for it. As McKinney began working on the exhibition design, Strege recommended him to the Menno-Hof in Shipshewana, an interactive information center that tells the story of the Mennonites and the Amish. What struck McKinney about the Menno-Hof was the way it created an immersive sensory experience for its visitors. The objects and artifacts were there to bring history to life.

This resonated with McKinney. As a designer, he is acutely aware of the ways that everyday objects of culture can in turn shape and influence a person’s thoughts and behavior. When the circumstances are just right, they can “speak” to us.

As work on the Interpretive Center continued, he was invited to think through which objects to include, and how they might best be displayed. He found himself always asking, “How can we amplify the story with this object?”

For example — E. E. Byrum’s desk. Instead of the more typical objective writing voice used to describe the other displays in the Interpretive Center, the information about Byrum’s desk is given as a first-person account — from the desk itself. McKinney laughs when he remembers suggesting the idea to Strege, who was reluctant at first. But “He did a fantastic job,” McKinney says, with a nod of reverence. “And, it adds something different.”

In the months since the Interpretive Center has opened, McKinney has been encouraged by the public’s response. He recalls observing visitors who came during the Global Gathering. As they made their way through the space, they started remembering their own experiences; older visitors began sharing their memories with their children and grandchildren.

It’s a living center, in a way.

The Interpretive Center is located at the entrance of the Church of God Ministries building on the Anderson University campus. It is open to the public on Fridays, 9 a.m. to 5 p.m (excluding holidays), or by appointment. To arrange a weekday visit at other times, contact Carl Stagner at 800-848-2464, ext. 2113 or by e-mail at CStagner@chog.org. Admission is free.