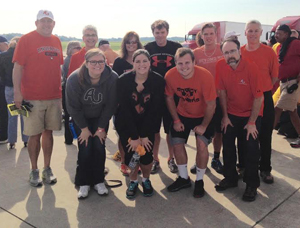 Photo: AU faculty, staff and students came out to the United Way First Annual Truck Pull. The Anderson University team made it into the semi-finals.

Last year, Anderson University students gave back to the community by spending nearly 40,000 hours in service learning and volunteer activities.

Service may be part of the AU tradition, but a team of faculty, staff and students pulling a truck to support United Way of Madison County was new for 2014.

Student United Way, an organization on AU’s campus, is a service group dedicated to carrying out the Live United mission of the United Way. They do this through service unique to the campus and by supporting fundraising and service activities hosted by United Way of Madison County.

“The idea behind the event was, ‘When we all pull together, we win,’” he said.

“There were over 20 teams representing restaurants, businesses and hospitals,” said Lindsey Van Ryn, a senior finance major and Student United Way volunteer. “It was so encouraging to have everyone there working for the same cause.”

Attendees also heard the stories of families who benefited from services and programs supported by United Way funding.

As for Student United Way at AU, it has been an organization predominantly run by upperclassmen and females in recent years. Paquin is bringing new ideas that he hopes will help the young organization grow.

“One of my goals for Student United Way this year is to increase the involvement of both males and underclassman,” said Paquin. “As a university and a student body that understands the power of serving others, I have made it my mission to try to get everyone involved in some way or another.”

“Anderson University is part of Anderson,” she said. “Serving others in need is rewarding, humbling and shows that AU cares about the community.”

Students are learning that they can make a difference in big and small ways.

“What I really enjoy about this organization is that there are so many ways to reach the people in our community and it does not have to be a large scale project to do so,” said Megan Stasiak, a senior psychology major and Student United Way volunteer.

Even though Student United Way is a small club, they still possess big visions for Madison County and are encouraging students to get involved as much as they can.

“AU’s involvement in Student United Way is incredibly crucial to our success,” he said. “Even if a student can only be at one project or meeting all year, they are still valuable and can make an impact in the community.”