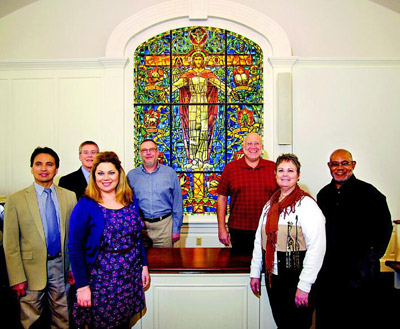 The large stained glass window at Anderson University’s Adam W. Miller Chapel has been a centerpiece of the School of Theology since its placement in 1976.

The window features a number of symbols of theological importance chosen by the faculty at the time. But in the decades since, Seminary Dean David Sebastian wanted to see what the images say to this generation of students, faculty, staff, and worshippers who gather in the chapel.

He asked 10 different seminary faculty to answer that question through a preaching series titled “The Stained Glass Window Sermon Series.” He asked each one to deliver a sermon based on a different image in the window.

David Neidert, director or student development, said many students have come and gone since the window’s installation nearly 40 years ago and none of the faculty of the seminary at the time remain.

“Those images chosen were images the faculty then decided were really important for us to think about,” Neidert said. “So we wanted to see what those images say now to our current generation. Each sermon will explore what that particular image in the window we’ve looked out for almost 40 years means and it says to us as a community of faith today.”

The window was purchased by a donation from Edward and Norma Willhardt, of Toledo, Ohio.

Before the window was dedicated in 1976, the couple died in a plane crash so the artwork became a memorial stained glass window dedicated to them.

He gave an overview of the window images that intersperse scripture and hymns. Aukerman’s focus though was on the predominant image in the window — the resurrected Christ. Jesus is depicted with holes in his hands and feet and dressed in a royal robe as the risen Christ.

“The window speaks to the theological themes that are important to who we are as a group of believers,” he said. “This sermon series becomes not only an opportunity for the seminary community to enter into a meaningful worship experience during chapel but an opportunity to teach faculty, staff, and students some of the deepest and most important theological themes of our own particular heritage.”

Though Christ is central to the window, other images hold deep symbolism. For example, at the top of the window is a dove symbolizing the power of God coming to earth.

Robert Branson, adjunct instructor in the School of Theology and adult learning, focused on the image of creation during his service last month.

“I asked the question, ‘How big is your God?’” Branson said. “Time and space mean nothing to God yet He is present with us.”

Using scripture from John 1, he spoke about what gives people purpose, identity and meaning.

“We are given the authority to become children of God and have a relationship with God who controls all of the universe.”

— Abbey Doyle is a reporter for The Herald Bulletin. Story reposted with permission.