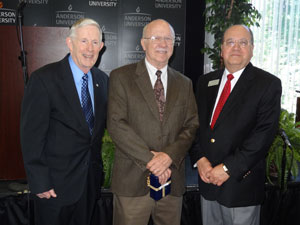 Rev. David Coolidge graduated from Anderson University in 1957. He was ordained in 1958 and began serving at Park Place Church of God in Anderson in 1959. For the next 40 years, he served as an associate pastor and minister of music and worship at Park Place Church of God. He did as much pastoral care as choral conducting and enjoyed them both thoroughly. During those years, he also found time to earn a master’s degree from Christian Theological Seminary in 1966. [Pictured left to right: 2012 School of Theology Alumni and Friends Award recipients Rev. David Coolidge, Dr. Neil Snarr and Rev. Don Taylor.]

When he retired in 1999, Reverend Coolidge learned that ministry is a lifelong pursuit. After 42 years of pastoral care, he had become dear to many people in the Church of God and was called on to officiate at both funerals and weddings. He also started a new ministry from his home computer — a worldwide e-mail prayer chain. Church of God friends and Anderson University alumni remain an important part of each other’s lives through his prayer chain. He lives in Anderson with his wife, Shirley, also an Anderson University alum.

Dr. Neil Snarr received both his undergraduate and Master of Divinity degrees from Anderson University. He also completed a doctorate in Christian ethics from Iliff School of Theology, a master’s degree in sociology from the University of Denver, and a doctorate in sociology from The Ohio State University. He taught sociology and global studies at Wilmington University for 43 years. He and his son, Michael, edited the textbook Introducing Global Issues and are currently updating the fifth edition. His articles have appeared in many publications. His wife, Ruth, also attended Anderson University. 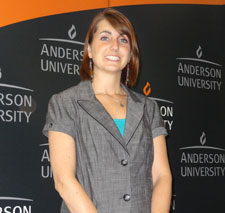 Rev. Shannon New-Spangler received her undergraduate degree from Anderson University in 2002. She continued her education at the School of Theology, graduating in 2008 with a Master of Divnity. In 2008, Shannon was the first student to receive the newly established Jeeninga Fellowship in Archaeology. She spent three weeks on an archaeological dig in Tel Dan, about twenty miles north of the Sea of Galilee on the Jordan River, followed by a week in Jerusalem, visiting holy sites. Shannon now leads a congregation at Harvest Point Church in Lordstown, Ohio. She is married to Anderson University and School of Theology alumnus Brett Spangler.

Rev. Don Taylor has been ministering through the Church of God and Anderson University for the past 43 years. He began his service as a chaplain’s assistant aboard a Vietnam command flagship. He and his wife, Pam, came to Anderson University in 1973. Don worked as the financial aid director while his wife served as the resident director in Martin Hall. During his career, Don served at the Salem Church of God in Dayton, providing leadership during the construction of a new facility and encouraging church congregants to go out into the community and serve Christ there. He served on the Church of God World Service team while also finding time to complete a Master of Divinity degree at the School of Theology. In 2001, he was named the assistant to the president of World Gospel Mission.

He rejoined the staff at Anderson University in 2004 as a development officer. His duties have included finding and encouraging funding sources to benefit the School of Theology and the seminary’s students. With the help of the entire development team and the faculty and staff of the seminary, endowment scholarships and Blackwelder funds have increased significantly since 2004. Don and Pam live in Anderson, where they are active at Madison Park Church of God.