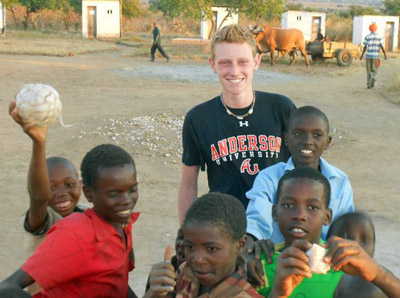 As he stepped onto the lit stage and looked into the crowd at Walt Disney World, 18-year-old Austin Gutwein felt the presence of Christ calming him to tell his story to the 20,000 ears eagerly waiting. At the Night of Joy conference, he shared his struggles, goals, and accomplishments and now, just months later, Gutwein brings his story of hope to the campus of Anderson University.

Gutwein, a freshman political science major, chose AU for the emphasis the campus has on Christ. “There is such a sense of Christ on this campus, and the mix of students that I found here was an added bonus,” said Gutwein.

In 2004, Gutwein watched a video that discussed AIDS and the tremendous loss the disease has brought to all affected. At the age of nine, he felt God calling him to action. On World AIDS Day that year, he shot 2,057 free throws to raise money for children in Africa. From support of family and friends, Gutwein raised almost $3,000 to send to an orphanage. 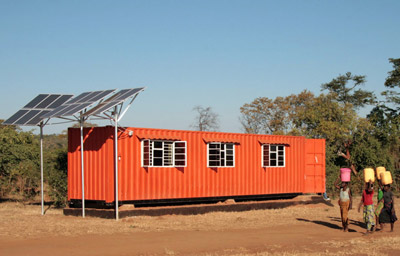 “At the start of this, my mentor from World Vision, Dana Buck, encouraged me to continue this free throw marathon, and now it is called Hoops of Hope,” said Gutwein. “Dana was the one to encourage me to use a sport that I loved for a cause that broke my heart,” said Gutwein.

Now, eight years later, Hoops of Hope is the largest free throw marathon fundraiser, with more than 40,000 people in 27 different countries participating and raising more than $2.5 million. With the funds raised from the annual Hoops of Hope events, Gutwein has organized several AIDS relief projects including the construction of a medical lab in Zambia and the sponsorship of orphaned children whose parents died from the disease. “I try to be the little boy from John 6,” said Gutwein. “He gave his lunch to feed thousands, and I believe we all have ‘lunches.’ I am using the ‘lunch’ God gave me the best I can.”

With his first book released in 2009, Take Your Best Shot, on the best-seller lists and his second book, Live to Give, released in August, Gutwein is using his gift of writing to spread his story of hope and the stories of the millions affected by AIDS.

“I find writing and public speaking natural,” said Gutwein. “It’s my way of being the voice to the voiceless. I have the opportunity to tell not only my story, but their stories as well. Since I want to be a politician and be a voice for the people, I better start practicing it now.”

Gutwein strives for a career as a Christian politician. “Many people wonder why I’m not a Christian ministries major, and I fought a long time with choosing that path,” said Gutwein. “But I think God gives you many doors to choose from that He knows you will succeed in, and it depends on which one you pick to walk through. I chose the political science road and couldn’t be happier.”

Gutwein’s life motto is to “grow as God grows.” He chooses every day to simply be himself. “I don’t want to be anyone else,” said Gutwein. “Austin Gutwein is who I am. We each have our own callings and I personally want to use my own ‘lunch’.”

Nick Vujicic Inspires Students at AU ChapelColleges & Universities
Build Each Other Up in LoveAll Church of God, Global Strategy