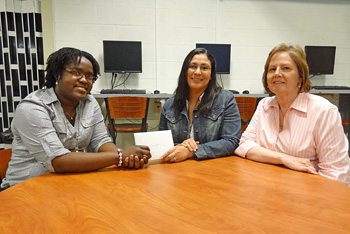 Not long ago, Anderson University senior Latoya Francis was faced with a dilemma. The international student from Grand Cayman would soon be graduating, then participating in her third trip to Uganda, where she has been involved in the Tumaini Aids Prevention Program (TAPP). But she did not have the funds to finance her return home.

Considering her options, Francis, an accounting and youth leadership-development major, decided that selling her laptop computer would be the best way to raise the needed funds. She contacted AU alumna Suahil Housholder, accountant at AU and Anderson Dining Services, and asked if a “for sale” email could be sent to faculty and staff.

Housholder, also originally from Grand Cayman, was happy to assist, and sent out the email on the AU classifieds email list on Wednesday, April 25.

One of the first to respond was Nelda Ely, graduate student counselor.

“I was still at home that morning when I saw the email, and I immediately felt it was so sad that she had to give up her laptop, because I know how important they are,” said Ely. “I paused a moment to pray, because I thought, ‘Okay, I know there a lot of needs on campus. Is this really appropriate?’ And I didn’t feel any halt in my spirit.”

Ely sent an email response to the classifieds list, asking if it might be possible to contribute funds so that Francis would not have to sell her computer. By the time she arrived at the office around 8 a.m., Ely was surprised to find she had already received 8 to 10 responses from others who wanted to contribute.

Housholder, too, was floored by the immediate response.

“I work from home and didn’t have the opportunity to check my email until about 10:30 in the morning, and when I did I was just blown out of the water.” she said.

Housholder agreed to coordinate the collection, and by May 1, $1,255 had been contributed by more than 35 faculty and staff on campus.

For Francis, the contributions help assure not only her return home but also a major part of her work with TAPP in Uganda over the summer.

TAPP was founded by Church of God missionary Colleen Stevenson in 2004 as a response to the AIDS crisis in Uganda. According to TAPP’s Facebook page, TAPP finds hope and compassion by seeking solidarity with individuals infected and affected by HIV/AIDS through creating opportunities for sustainable income.

“With TAPP women, most of them don’t have enough money to send their children to proper schools, so I’ve been researching a private school for the poor,” said Francis. “They have a couple of these in Africa and India that have been quite successful, so I was researching how we can use this model and tailor it to the needs that are currently in Uganda.”

With the support she has received from AU faculty and staff, Francis will be able to take her research further than she had anticipated.

“It actually means that I get to not only go, but I get to finish the business plan and have a chance to see it come to fruition,” said Francis. “I can write and say all the things I think need to be said, but to make it successful, you need to actually sit down with the administrators and teachers to come up with a curriculum that fits the needs of the families and students in Uganda.”

Housholder and Ely both expressed their appreciation for those who contributed.

“I think this demonstrates the true heart of Anderson University, that we are a God-loving people and we seek opportunities to help others,” said Housholder.

“It’s been exciting for me to see the faces of those who have contributed,” said Ely. “ I think all of us have been blessed as much as Latoya has been.”

“As a student, one of the things that has been instilled from Day One has been the idea of servant-leadership,” she said. “To see that faculty and staff would go out of their way to help a student this way, it just shows me that servant-leadership is not just talk, but it’s actually something that’s lived on this campus.”