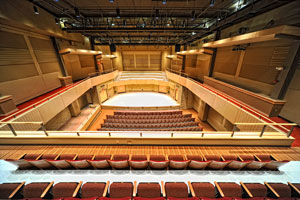 Anderson University dedicated the York Performance Hall and Galleries on Sun., Sept. 23. The state-of-the-art 24,000 square-foot facility, with a cost of $5 million, adjoins the existing music wing of the Krannert Fine Arts building, bringing together classrooms, rehearsal rooms, and the new performance venue. The performance hall is designed to be a flexible performance space for many ensembles, solo student performances, and visiting artists.

“We have referred to this project as a sanctuary for the arts because it is a space on our campus like no other, created to enhance the student experience and lift up musical performances at their very best,” said Dr. James L. Edwards, president of Anderson University. “Our excellent musical program now has a venue so well suited for our developing and gifted students and the many guest artists who will come our way. We are deeply grateful to Drs. James and Elizabeth York and all who have invested to impact our program and our wonderful students for generations to come.”

The York Performance Hall and Galleries features orchestra space for 45 musicians, a choir loft for 75 voices, and an advanced acoustical design. The main floor of the facility seats 250 while the balcony space seats approximately 75. The width of the facility is appropriate for ensembles, and the ceiling height is set to develop sound reflections and a pleasant level of reverberation. Because some performances benefit from a less reverberant environment, the space includes retractable banners and curtains made of wool and velour. The heating and air conditioning systems have also been designed to achieve a near-silent acoustic environment.

“York Performance Hall places us ‘on the map’ among major music schools in the Midwest,” said Dr. Jeffrey Wright, dean of the College of the Arts at Anderson University. “It elevates us to a new tier of peer institutions and makes a strong statement about the high caliber of musical performances that we offer on our campus. Music is always shaped by its acoustical environment. This hall will greatly enhance the performances of our students, faculty members, and guest artists, and it will provide unforgettable concert experiences for our audiences. We are so fortunate to have this acoustically superior venue on the campus of Anderson University.”

Drs. James and Elizabeth York provided the lead gift for this new facility on the AU campus. They have given of their time and resources to make a difference in people’s lives. Their giving spirit convinced the couple that Dr. James York should retire early from his practice of orthopedic surgery so that they could work in mission hospitals throughout Africa. It also prompted them to contribute to the Harry L. and Henrietta Harp Endowed Memorial Fund at Anderson University. And it is one of the primary reasons they created the James M. York, M.D., and Elizabeth H. York Endowed Scholarship Fund through the AU School of Theology. The Yorks also provided resources for the York Seminary Village project at AU and the York Rare Books and Special Collection in the Nicholson Library.

The architectural firm of KRM in Anderson designed the project while W.R. Dunkin and Son, Inc. managed the construction of the facility. Rick Talaske, president and principal consultant of Sound Thinking in Chicago, served as consulting acoustician.

The university will recognize the Zachary Novak Green Room as a part of the York Performance Hall and Galleries. In March of 2012, AU announced the receipt of a major gift from the Novak family to name the Green Room in the York Performance Hall and Galleries in memory of Zachary Novak BA ’04, who died in a 2006 plane crash. Novak was born and raised in Anderson. He graduated from Highland High School in 1999 and from Anderson University with a bachelor’s degree in music education in 2004. At the time of his death, he was due to graduate from the Jacobs School of Music at Indiana University with a Master of Music degree in choral conducting with a minor in voice.

The York Performance Hall and Galleries facility provides permanent gallery spaces for both the Warner Sallman Art Collection and a world class collection of wood art. More information about the official opening of the wood art collection, underwritten through the generous support of Bill and Gloria Gaither, will be announced in coming months.

The Warner Sallman Art Collection at Anderson University includes oil paintings, pastels, watercolors, pen and ink drawings, and bits of typography produced by Warner Sallman. The collection includes some of the best-known images of Christ in the world produced by Sallman, including “Head of Christ.” The gallery is supported by a generous gift from Mabel Scheierman and her late husband, Kenneth Scheierman. The Scheiermans have been generous benefactors of the university for several decades and have been active in the Stratton, Colo., Church of God as well as state and national organizations. Anderson University maintains a website dedicated to Sallman’s work: www.warnersallman.org.

The Bengtsons are longtime supporters of higher education and have made special efforts to promote creative arts on the AU campus. With the excitement of seeing the School of Music, Theatre, and Dance grow with the addition of the York Performance Hall and Galleries, the Bengtsons are launching the inaugural year of the recital hall with this series of concerts. Dr. Bengtson, former dean of the School of Music, Art, and Design at AU, believes a special connection occurs between artists and audiences during live performances, and he and his wife are happy to share those connecting moments with the Anderson and AU communities.