By chogministries
Posted September 7, 2018
In All Church of God
AU Biblical Languages Professor Removes Barriers to Learning2018-09-072018-09-07https://www.jesusisthesubject.org/wp-content/uploads/2016/07/ChogLogo-Light.svgChurch of God Ministrieshttps://www.jesusisthesubject.org/wp-content/uploads/2016/07/ChogLogo-Light.svg200px200px 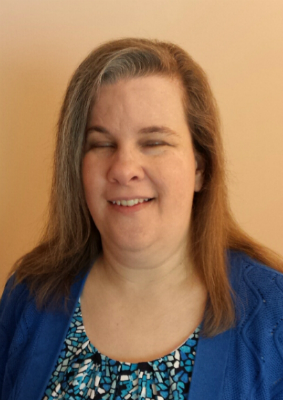 Two years ago, Church of God Ministries celebrated through a CHOGnews article the remarkable kingdom contributions of a blind minister to scholarly Bible study. Already awarded by the National Federation of the Blind, Sarah LaRose never set out to be recognized. This AU School of Theology and Christian Ministry professor had contributed to the improvement of tools commonly used by visually impaired persons to read documents, including the Bible. In the past two years, her love for ancient languages and her love for the Word of God have inspired her to continue doing as much as possible to remove barriers for the blind. One of her most recent accomplishments was translating the two-thousand-page Brown-Driver-Briggs Hebrew-English dictionary into braille, resulting in eighty braille volumes.

It took two years to complete, but it was more than worth the effort. The idea came about by request from one of the first students to take the program at Anderson. “He had difficulty taking Hebrew when he was at Yale,” Sarah explains, “and he needed it when he went back. Now he’s in the doctoral program at the University of Texas. The whole project has come a long way in enabling students to succeed. I feel like what has gotten started here at Anderson has made a lot of ripples in many other places, allowing more and more students to learn Hebrew.”

Hebrew, really? It’s all Greek to some of us. Sarah LaRose teaches both Hebrew and Greek to both blind and sighted students, and sees the incredible value of learning the biblical languages. She’s doing her best to impart that same passion to her students. “I grew up without a Bible that I could read,” she recounts. “When I think about what it means for people who are reading the Bible for the first time in their language, it’s a similar feeling. Since the Bible became accessible to me, I’ve always wanted more and more.”

Sarah wants her students to learn all they can about God’s Word so they can communicate it to those who need it most. She continues, “The basis of our English translations is the ancient languages. It’s so enriching to read and translate myself, because it uses a different part of the brain. You can run right over something that’s really important that may be background information to the text. Translating it yourself makes you think about what it really means.”

This semester, Sarah is thrilled to teach Greek alongside longtime professor Fred Shively. The course is online, and while he’s taught the subject matter countless times before, his online teaching experience was lacking. Sarah, who has taught as an adjunct professor and has much online experience, complements the teaching team. Sarah and her husband Kevin also update a blog about life and ministry as a blind minister and professor. Her Facebook page has garnered a faithful following, of which perhaps a third are also visually impaired. During her major translation projects, she’s kept in touch with manufacturers of translation technology for the blind, offering insight and valuable feedback when necessary.

Sarah LaRose was invited to present a paper at the International Conference of the National Association of Professors of Hebrew last year. Her love for learning is perennial, and she contributes to the kingdom and academia as much as possible. Her story is inspiring, and her heart for the Lord is strong.

Want to hear more from this incredibly gifted communicator and minister of the gospel? Sarah Blake LaRose, who will complete her doctor of ministry next May, is on the Indiana pulpit supply list! Learn more through Indiana Ministries at www.indianaministries.org. Interested in learning Hebrew or Greek? Learn more about the Anderson University School of Theology and Christian Ministry at www.anderson.edu/sot.