At the Crossroads: Indiana Churches Initiate Plan to Multiply

By chogministries
Posted April 2, 2019
In All Church of God, Give Life, Great Lakes
At the Crossroads: Indiana Churches Initiate Plan to Multiply2019-04-022019-04-02https://www.jesusisthesubject.org/wp-content/uploads/2016/07/ChogLogo-Light.svgChurch of God Ministrieshttps://www.jesusisthesubject.org/wp-content/uploads/2016/07/ChogLogo-Light.svg200px200px 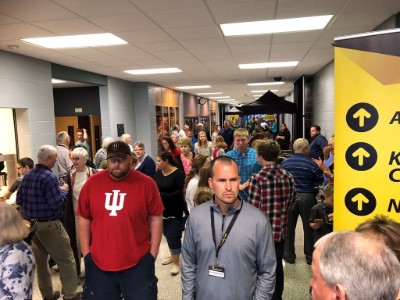 Nate Tatman had no idea how pivotal that moment would be. He’d been in the office of Indiana Ministries when something caught his attention. The map of the state on the wall wasn’t anything new; he remembered seeing it before. But what he hadn’t noticed was the distribution of push pins on the map, which indicated counties that did not have a Church of God congregation. In particular, he noticed this time that there were thirty-seven counties in total with no Church of God congregation. And that’s when things began to get interesting.

“Has Indiana Ministries ever thought of some initiatives to plant churches in these vacant counties,” he asked Doug Talley, executive state pastor. Nate didn’t know what to do with what Doug said next: “What is County Line going to do about it?”

County Line Church of God is where Nate serves as mission advancement pastor in Auburn. Not having considered this before, Nate didn’t have a response. Surely the pastoral staff would have to discuss it first; it was hardly on the radar. So, the moment came and went, and Nate didn’t bring it up. Until…

Five months later, when Stuart Kruse, senior pastor of County Line, did. He’d just returned from a three-month sabbatical over which time he had read the popular Mark Batterson book, Chase the Lion. The book challenges readers to imagine and pursue dreams that can only come to pass by the hand of God. Stu began to quietly wonder how many counties in Indiana don’t have a Church of God congregation. Through prayer, God impressed upon him the notion that a solution could begin with County Line Church. 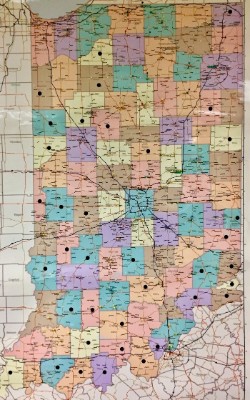 He shared his conclusions with Nate and, as you might expect, Nate was dumbfounded. “This is exactly what God laid on my heart five months earlier!” Nate writes in recollection of that day. “When he finished, I shared what happened to me at Indiana Ministries and showed him the picture of how many counties did not have a Church of God congregation. We both had chills.”

Covered in prayer, a strategic plan began to take shape over the months that followed. Since Indiana is known as the “Crossroads of America” and there were thirty-seven counties at the time without a Church of God congregation, the initiative became known as Crossroads 37. Ultimately, it was time to gather Indiana churches that wanted to be a part of this effort to sit down and talk. After all, County Line could not go it alone. They needed the resources and support of Indiana Ministries and the input and participation of as many churches as possible. On January 22, representatives came to discuss the possibilities and learn together what God kind of vision for church multiplication God was revealing to the whole.

Besides County Line, among the churches represented at that first meeting were Catalyst (Pendleton), East Side (Anderson), The Foundry (Columbia City), Lagrange (Lagrange), North Webster (North Webster), South Creek (Kokomo), Town Center (Mooresville), and United City (Indianapolis). Other churches that have indicated interest but weren’t able to be present on the 22nd of January were Crosspoint (Fishers), Madison Park (Anderson), and Thursday (Vincennes). It was a beautiful, Spirit-directed experience for everyone, and though it may not have seemed like much was decided, one decision was foundational—they would meet by video conference on a monthly basis for the single purpose of prayer. As Nate and Stu point out, “This kind of vision is only going to come to fruition with God leading the way.” 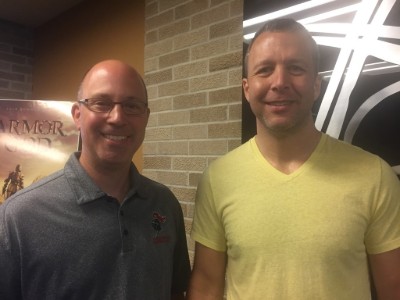 Participation of other congregations is necessary, as well. “This is not County Line’s vision, but God’s,” they explain. “He clearly gave it to us, however it’s not about us—it’s about the kingdom…To ensure this vision continued to grow at the local level, we felt it was important to reach out to other local churches that share a like-minded burden of reaching lost people through church multiplication.”

Not only that, but there’s an inescapable component of unity in play. “This was also a way for pastors and churches across the state to work together toward a common goal and see our corner of the Church of God experience what it means to be a part of a movement of God.”

County Line Church of God is a thriving congregation in northeast Indiana. They’ve got a lot going, and one might wonder how they can add another item to their full plates. “Everything we have done and continue to do always comes back to our mission and vision statement,” they say, “which is ‘Restoring our communities with Christ one life at a time.’ Through that filter, we are constantly evaluating what we do, its effectiveness, and if we can change or improve it…Church multiplication is something we have been talking about for a few years. Planting churches is the necessary response to the issue of so many churches closing their doors…Planting churches has proven, time and time again, to be one of the most effective means to reach people who are far from God and to take back what hell has stolen.” 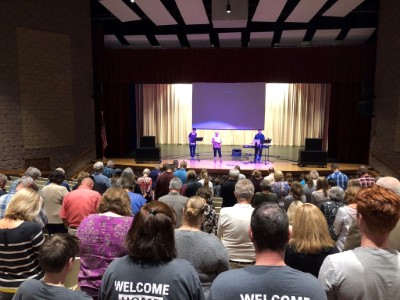 County Line had never planted a church before, so the next step was leading by example. In October of last year, they launched their first campus in Garrett, Indiana, with plans to launch their next campus later this year. Partnerships have been vital to so much stretching and growing: Indiana Ministries, Healthy Growing Churches, and the New Thing Network, for example. At the same time, church multiplication is resonating through County Line and their partnership with Global Strategy, Three Worlds, and the creation of Europe X. As the initiative continues to take form, Crossroads 37 is recognizing the value of being open to counties that may already have a Church of God congregation, as well as the merit of planting satellite campuses as the Spirit directs.

Doug Talley couldn’t be more pleased with the developments: “What blesses me most about Crossroads 37 is how a local church’s vision intersects with the multiplication vision Indiana Ministries has been casting for the last ten years. Our conversation has been that, in order for church multiplication to really happen, it has to shift from something the state ministry does to something local churches own. The state ministry’s role is to help cast vision and support and resource multiplication at the local level. Nate Tatman and Stu Kruse have taken the initiative to own this shift and invited other pastors and churches to join them. As a result, more people will come to know Christ and will be disciples who make disciple-makers.”