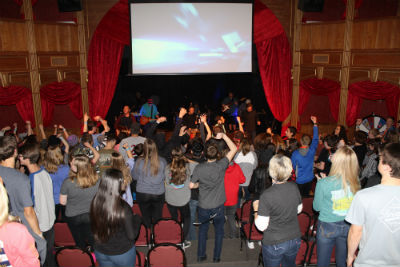 Incredible things happen when churches sacrifice their own agendas and ministry plans to unite under the banner of Christ. Apart from each other, congregations are making great strides to advance the kingdom. But together, they can do what none could accomplish alone. In Arizona, students and youth leaders are setting the example for their older counterparts. Organized youth gatherings had ceased, yet the need for relational connectivity was palpable. The budget for a major production did not exist but, working together, several churches could make a life-changing convention possible. For the past five years, they’ve made it a reality.

“This was actually the fifth year of the event,” Kayla Harden, student ministries pastor at West Side Church of God in Glendale, explains. “But what began as a gathering of two churches has grown to include almost three hundred students and leaders representing six churches.” North Hills in Phoenix and McDowell Mountain in Scottsdale were the two original churches to unite. Since then, the number of students and churches participating has only grown. 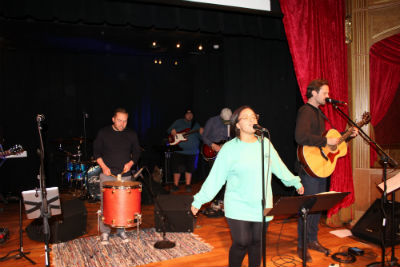 This year, unity between churches was on full display. One of the most public expressions of such unity was evident in the worship band. “Often, camps and conventions seek to hire an outside band. Whether they bring in a worship team from a church or hire a professional worship leader, like Charlie Hall or Alanna Story at IYC, they are usually aiming for a group that plays together on a regular basis. The idea actually came to us last year as we began to plan. Cody Bracy, worship leader at Arcadia City Church in Phoenix, came up with the idea of bringing in worship leaders and instrumentalists from different churches. As our camp grew again this year, so did the band and tech team, which included people from six different churches. These worship leaders unified to bring about a powerful time of worship for students and leaders.”

The band and tech team at Arizona Youth Camp 2016 represented North Hills, McDowell Mountain, Arcadia City, West Side, as well as Mountain Park and The Gathering Place churches of Phoenix. At a beautiful campground in the pines above the quaint community of Williams, Arizona, nearly three hundred students from these churches worshiped the Lord together. For students, leaders, and camp volunteers, the weekend was a picture of heaven on earth. This single annual event is now fostering connections beyond the camp itself. Kayla describes what is happening as revitalization that only God could bring about.

Jesus was the subject of each worship team, each church. His kingdom was sought above all else at every stage of planning for the collective good of all the churches. Cody Bracy recalls, “This unique partnership between churches in the Valley has created a sense of unity and friendship. The combined worship team has given us the opportunity to offer something our individual communities could not offer otherwise. The band was assembled together from six different churches, different worship styles, different gifts, different personalities—but one common goal. That goal is to see the kingdom of God at work in the students of this state—to allow students to see that they are not alone and that we are better together.”