The Church of God has a long, rich history of affirming women in ministry. While the movement hasn’t been flawless in it support for women clergy, great strides have been made in recent years to return to our roots. After all, we stand upon a foundation today laid long ago by early women leaders in the Church of God movement, not to mention the women leaders recorded in Scripture. A new season of support for women in ministry has begun as Christian Women Connection announced Arise at Convention 2019 and General Assembly in Orlando, Florida. Formerly Qara, the new ministry branch of CWC stretches beyond its own history of rallying all women of the Church of God to a specific area of need—coming alongside and resourcing women in ministry.

“The name change from Qara to Arise accompanies an expansion of what is offered to women in ministry through CWC,” Kayla Harden, ministry coordinator of programming for CWC, explains. “We’re now offering mentoring, community groups, conferences for women in ministry, and access to assessment tools, in addition to the monthly newsletter and gatherings previously hosted by Qara.” 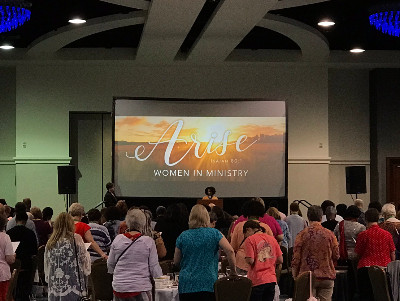 Announcing the new Arise at the CWC luncheon in Orlando. Credit: Alyssa Peterson-DeWitt.

Indeed, a ministry like Arise is needed in the Church of God for such a time as this. “Though women have always been a part of growing the kingdom of God,” Kayla continues, “our voices have often been silenced due to our gender. Arise empowers and equips women who have a call to ministry. Arise provides a community of women who understand the unique challenges that women face in ministry.”

Starting this month, and each month going forward, look for the Arise logo in the CHOGnews e-newsletter for a women-in-ministry feature you won’t want to miss!

In February, CWC assumed the leadership of Qara. Read Jim Lyon’s praise for this transition here. Learn more about Arise at www.arisechog.org.