OK, so the hundreds of people gathered at Madison Park Church of God in Anderson, Indiana, for the Regional Conference didn’t actually charter a plane, cross the Atlantic, and embark on a tour in the Holy Land (you can do that later with Jim Lyon, by the way!). But through the power of technology, the Thursday morning speaker took everyone on a virtual tour to Nazareth, Capernaum, and the Sea of Galilee. Bob Rognlien, an archaeologist, historian, and biblical scholar, who loves Jesus and the Church of God, presented facts and figures in an engaging manner to lay a foundation upon which the Movement can solidify its understanding of, and live out the implications of, identity grounded in the I Am.

The emphasis on the way of Jesus implies not only what the Lord said, but what he did and how he did it. Bob helped the Church of God take a closer look at the original language of words used in Scripture, contextual clues concerning how people lived and in what kinds of dwellings they could be found, and the manner in which people conducted themselves. When we examine the culture context, we can better understand who Jesus is, why he did what he did, and how the identity of a disciple should mirror that of his or her rabbi, or teacher. Bob insisted that true disciples listen, watch, and learn: they learn what the teacher knows and do what the teacher does.

Bob Ronglien’s message began with an attention-grabbing historical video clip from the iconic television series To Tell the Truth. Connecting the common pivotal point of each episode’s conclusion—“Will the real ___ stand up?”—Bob suggested that we might say, “Will the real Jesus stand up?” Of course, Jesus has revealed who he is, but too often, as Bob noted, “It’s so easy to cast God in our image” instead of casting ourselves in his!

Citing Matthew 16:13, Bob said each individual Christ-follower needs to answer the question Jesus asked, “But who do you say I am?” He continues to ask us that question. Bob said of the early disciples, “They needed to know who Jesus was in order for them to know who they were.” The same principal applies to today’s disciples.

“If we are going to live into our destiny and become who we’re meant to be,” Bob preached, “we must begin by knowing the real Jesus.”

Missed the Regional Conference in Anderson? One more opportunity remains this year in Orlando, Florida, as the third and final Regional joins forces with the Church of God Women’s Convention, October 13–16. Details and registration information available at www.chogconvention.org. 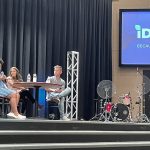 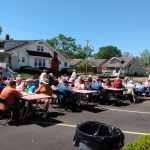