By chogministries
Posted May 7, 2014
In All Church of God, Global Strategy, Missionary Announcements
Announcing Steven and Peggy Beverly: Missionaries to Sri Lanka2014-05-072014-05-07https://www.jesusisthesubject.org/wp-content/uploads/2016/07/ChogLogo-Light.svgChurch of God Ministrieshttps://www.jesusisthesubject.org/wp-content/uploads/2016/07/ChogLogo-Light.svg200px200px 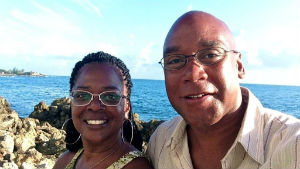 INTRODUCTION: Steven and Peggy Beverly grew up together in Kansas City, Kansas. They lived around the corner from each other, and even rode the school bus together. Steven’s father, Sethard Beverly, pastored Third Street Church of God, and Peggy’s father was a construction entrepreneur. Neither Steven nor Peggy knew that God would bring their paths together after thirty years.

Steven graduated from Anderson University and, after teaching journalism in the Cayman Islands, became the associate editor of Vital Christianity magazine. Steven would go on to become editor of ONEvoice! magazine, then journalism instructor at Ball State University before his current position as marketing manager at a museum.

After studying at Emporia State University in Kansas, Peggy attended Rhema Bible Training College, where she felt a call to missions. With the support of her family, Peggy’s call to serve took her on multiple trips to Nigeria, Uganda, Kenya, Nepal, Thailand, and Israel. She is currently itineration specialist for Global Missions.

When Steven and Peggy met again in 2006 during the North American Convention, their rekindled friendship turned to love, and the two were married in 2007. Both have a heart for missions and desire to fulfill God’s call on their lives. They served together on short-term assignments in Catadupa, Jamaica, and in Poza Rica, Mexico, while making plans to pursue a career missionary assignment. After much prayer and seeking God’s direction where he would have them serve, Steven and Peggy soon felt God’s call to serve in Sri Lanka.