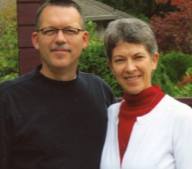 • Pastor of the Hanoi International Fellowship (My Dinh site).

• Create and teach a curriculum for Bible, spiritual formation and discipleship for the international community (HIF).

• Leadership development and training in the Asia–Pacific region as assigned by their regional coordinators, Don and Caroline Armstrong.

A rich Church of God heritage has been the foundation for both John and Gwen Johnson. John received his BA from Anderson University in 1980. He received his MDiv from Anderson University School of Theology in 1985 and his DMin from Ashland Theological Seminary in 2000. At both the master’s and doctoral level, John took classes at the Asian Center for Theological Studies (ACTS) in Seoul, Korea.

Gwen received her BA at Anderson University in 1979, and it was there that she met John.

Since 1980, John and Gwen have been involved in cross-cultural ministry. While raising their family, they were involved in leadership training and pastoring in South Korea, Egypt, and Lebanon, and served as Global Missions Asia–Pacific regional coordinators under Church of God Ministries.

Beginning in the fall of 2006, John joined the Religion and Christian Ministries Department at Warner Pacific College (WPC) as professor of ministry and missions. In addition to teaching, he served as faculty chair and department chair; Gwen and John together reignited the missions program at WPC, leading numerous trips to Latin America, Asia, Africa, and Europe.

Gwen is passionate about developing relationships and community, organizing events, and leading retreats and seminars on de-cluttering and simplifying your life.

The Johnsons currently reside in Portland, Oregon. They have two married adult children and are expecting their second grandson in May.