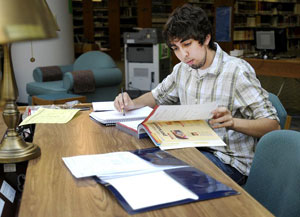 Change seems to be a pretty common theme in education this year in Anderson.

Anderson University began its first day of classes Tuesday with a new major, a name change for one of the schools, some additional business concentrations and a new approach to adult education.

And some students have noticed the changes over the years.

Collin Rudkin, a senior communications major, said AU is changing with the times socially and technologically.

And nontraditional students are no longer separated from other students as traditional classes are being emphasized.

Rudkin is more focused on his own future right now. He’ll be graduating in May and has already done internships, like one over the summer with a documentary maker in Oklahoma City, and is ready to move on to do some documentary making himself or head to grad school.

He’s living off campus, albeit with roommates, but said it’s another step closer to the real world experience.

He added that his schedule is more flexible this year, allowing him to take more classes he wanted to take with professors he’s developed relationships with.

“The first thing shocked me was the way (the) AU community integrate us and greet us,” he said. “Make us feel comfortable.”

Etienne said he likes his teachers and classes and feels AU is the place he’s supposed to be.

He’s going into global business and wants to put it to use back in Haiti by doing some agricultural business.

“I want to witness something here, see something,” he said. “A new generation of creation. I want to see that here (at AU).”

He added he wants to help children in his country who are starving, homeless and need schooling.

English major Alexis MacLachlan is a junior who didn’t anticipate her first day back at AU “to be so great.” It was much different from her freshman year when she was really nervous, she said.

“I think it’s going to be a really good year,” she said. “Students seem more excited than in the past.”

And while she’s a year away, she’s already looking forward to graduation.