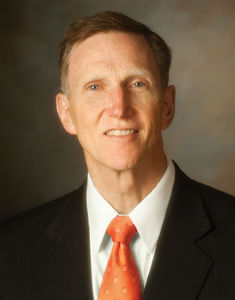 Pistole shared his vision for Anderson University is through the work of the outstanding faculty, staff, and administration, to encourage students while discovering what they believe, why they believe, and what difference it can make in their lives. “Pursuing excellence in all things” is foundational in “quality education in a Christian environment with people who care about you,” said Pistole. “I believe the best days of Anderson University and the City of Anderson are ahead.”

James B. Comey, Director of the Federal Bureau of Investigation, served as the special guest speaker for the inaugural event. Comey shared Pistole was “one of the finest people I have ever known” and that Pistole is a “rare leader” who “defines not just service but hardwork.” Described as a “lifelong champion of justice,” Comey said he “jumped at the chance” to honor Pistole in this next phase of his career leading the Anderson University community.

President Pistole follows the presidential leadership of Dr. James L. Edwards, who concluded twenty-five years of distinguished leadership as president of Anderson University in February 2015. At the conclusion of his presidency, Edwards was the longest-serving president (in both public and private universities) in the state of Indiana.

A native of Anderson, Indiana, John Pistole earned his bachelor’s degree from Anderson University in 1978. He went on to earn a juris doctorate from Indiana University School of Law before going into practice for two years. Pistole began a career with the FBI in 1983 before he rose through the ranks and was appointed deputy director in 2004. President Barack Obama appointed Pistole as head of the Transportation Security Administration in the spring of 2010, and his appointment was confirmed by the U.S. Senate on June 25.

In March, 2014, the Anderson University Board of Trustees formed a presidential search committee comprised of ten board, faculty, and alumni representatives. The committee also conducted focused conversations and meetings with groups representing Anderson University faculty, staff, and students, as well as representatives within the City of Anderson, the City of Indianapolis, and the leadership of the Church of God, just to name a few.

In his role as Administrator of the TSA, Pistole led a 60,000-strong workforce, the security operations of more than 450 airports throughout the United States, the Federal Air Marshal Service, and shared security for highways, railroads, ports, mass transit systems and pipelines. Under his leadership, the TSA worked to transform as a risk-based, intelligence-driven counterterrorism agency dedicated to protecting the nation’s transportation systems.

Anderson University is a private Christian university in central Indiana. Anderson University continues to be recognized as one of America’s top colleges by U.S. News and World Report, The Princeton Review, and Forbes. Established in 1917 by the Church of God (Anderson, Indiana), Anderson University offers more than sixty undergraduate majors and graduate programs in business, music, nursing, and theology.